According to Persian mythology, there is a magical black stone that absorbs the plight of those who confide in it. When the stone is shattered, the confessors are free of their woes.

When we first meet the character billed only as “Woman,” she is caring for her husband who lies nearly lifeless in a coma due to a bullet lodged in his neck. Woman, played by beautiful Iranian actress Golshifteh Farahani, wonders aloud how she will survive if he does not heal. This is Afghanistan, or someplace very like it, in the midst of war. Random gunfire is heard in the distance as she cries softly in their small hovel, “What will become of us?” She prays as a devout Muslim, asking God to spare her husband. It is clear in this early scene that she prays less out of love for the man lying before her and more for her own safety. Such is life in a society where women are forced to be completely dependent on men for their very survival.

As the story unfolds we learn that her husband, billed as “Man,” twice her age and a respected war hero, was not shot in battle but rather in a foolish fight with someone who insulted his mother. This leaves Woman alone in a war-torn village with her two very young daughters whose exuberance and neediness try her patience, while she does her best to keep her husband alive.  There is no electricity, no running water. The water-bearer doesn’t come anymore because he’s afraid of stray bullets. The only visitor they receive is the local mullah who she’d just as soon do without, so she tells him she’s “impure” – meaning menstruating, and away he goes.

The film captures life under the threat of constant violence in startling moments, such as an attack that occurs when the young mother has simply gone out with her daughters to the store for medicine, medicine which she is denied because she still owes from the last batch. As the war front moves ever-closer to her home, Woman watches men readying their guns and scurrying around in fevered activity. She muses, “They’re going to fight. They’re pleased.” 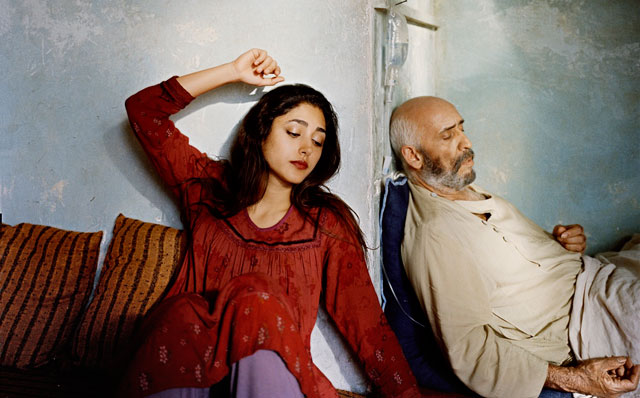 Eventually, Woman takes her daughters to live with her aunt in a brothel on the north side of town. Her aunt is a source of saucy stories and sage advice which Woman takes to heart, but she returns to husband out of a sense of guilt and duty.

Alone now with Man, Woman begins a quiet rumination on her circumstances mixed with desperate prayers that eventually give way to a dangerously honest confession.  Her story is a disturbing portrait of a world where women are entirely at the mercy of men who are raised to have none. An example includes the tale of how her 12-year-old sister was given to a 40 year-old man in marriage to appease a lost bet. There is plenty more where that came from.

Despite Farahani’s mesmerizing performance, the film becomes somewhat monotonous as we are essentially watching her deliver a monologue. One could easily imagine ‘The Patience Stone‘ as a stage play. This feeling is thankfully broken up with some arresting imagery, such as a brief but powerful moment when Woman savors a bit of rain on her face before pulling the burka overhead as she steps into the street.

Atiq Rahimi directs the film, adapted from his own novel, with a sure hand. There are no sweeping desert vistas, sprawling refugee camps, or any of the other clichés one would get in a Hollywood rendering of this story. It takes place in small, cramped spaces giving the viewer an intimate and personal sense of the claustrophobia that comes with living in such an oppressive culture.

‘The Patience Stone‘ is a thought-provoking film with a final image that will haunt the viewer.  Just remember the story of that magical black stone.