Paul Giamatti Is Set To Star in FX Comedy, ‘Hoke’!!! 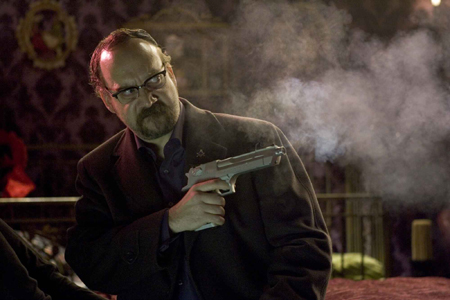 Actor, Paul Giamatti has been set to star in a new comedy-drama series for FX called ‘Hoke‘, which is based on a tons of novels by Charles Willeford. ‘Hoke’s‘ pilot episode was written by Scott Frank, who will also direct and serve as showrunner. Frank received an Oscar nomination for his work on ‘Out of Sight‘ and a Golden Globe nomination for his work on ‘Get Shorty‘.

The series follows Hoke Moseley (Giamatti), who is a hardboiled and perhaps an insane homicide detective in 1985 Miami, who is having a mid-life crisis. FX president of programming Eric Schrier said, “Like Elmore Leonard, Charles Willeford is one of the most deeply respected writers of crime fiction and he created a wholly original and colorful lead character in Detective Hoke Mosely. Scott Frank delivered a magnificent script and we are honored that Paul Giamatti will bring Hoke to life.”

It’s great to see Giamatti headed to television, and I’m sure he will kill this role, just like he does every in every project he says yes to. Plus, I can’t wait to see 1985 Miami again on-screen.

This project sounds like a lot of fun and adds to the amazing lineup of shows for FX including ‘The Strain‘ from Guillermo Del Toro and ‘Tyrant‘ from Howard Gordon.