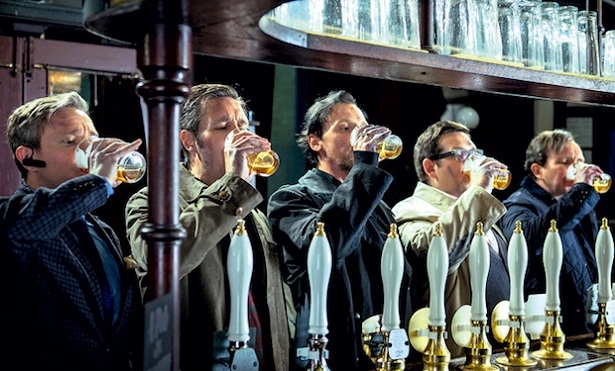 The third film in the Cornetto ice cream trilogy by Edgar Wright, Simon Pegg, and Nick Frost called ‘The World’s End‘ is as much fun and more action packed than their previous films ‘Shaun of The Dead‘ and ‘Hot Fuzz‘. This beer guzzling buddy movie garners gut busting laughs from start to finish and features impressive fight choreography, amazing one-liners, and one hell of a group performance by the actors. The B-movie homages and mid-life crises themes are done flawlessly with the highest of entertainment value that will make you want to watch this over and over again. I expect strong box office returns with this British extravaganza.

Edgar Wright is the king of entertainment. From start to finish, we are either laughing our ass off at a brilliant line from Pegg or Frost, or we are on the edge of our seats with the fast paced suspenseful thriller that is unfolding before our eyes. One of my favorite moments in the film is when Andy decides to give up the sober life and consume an amount of alcohol that could kill a blue-whale. The results will leave you in stitches. Pegg shines as Gary here, as he makes us laugh, but also has a sweet side, even if he comes across as an idiot. He means well and just wants to be with his friends one last time.

The fight scenes are very WWE-centric and pack a powerful, yet funny punch. If you  choose to see one film to end your summer, make it ‘The World’s End‘ and have a pint to go with it. You’ll be glad you did.

I had the distinct pleasure to sit down and talk with Edgar Wright, Nick Frost and Simon Pegg a while back about the film. Instead we geeked out on movies, wrestling, and all sorts of other cool things. They are so much fun to talk with and are huge movie fans. Enjoy the interview.