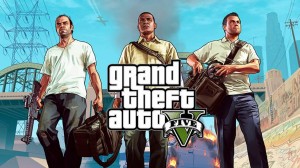 ‘Grand Theft Auto V‘ will release September 17th, 2013, and until now, we haven’t seen any official gameplay. We’ve only see trailers and teasers for the new game from Rockstar. Now, I was pretty excited about this game, but after watching this video, I’m in complete awe and my mind has been blown. The detail and graphics, the fluid motion of the action and characters are all top notch. This game looks amazing and I won’t be surprised if IGN gives it a 10.0 rating, judging by the looks of this video.

In addition to that, the game looks epic with gun battles in helicopters, many explosions, and even skydiving. It also looks like you can play sports in the game such as a game of golf, tennis, and even cycling. Then I witnessed one of the main characters trying to flush a dead body down a toilet. It’s all here. I can’t wait to play this. Enjoy the trailer below.