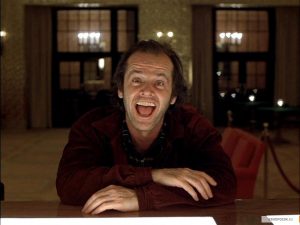 Stephen King fans unite in happiness!! King’s sequel novel to “The Shining” called “Doctor Sleep” is due out this fall. This, along with the documentary “Room 237” about the theories of Stanley Kubrick’s work recently being in theaters, has made way to a prequel of the famous book now being in the works. Glen Mazzara , the infamous writer took over for Frank Darabont halfway through “Walking Dead”, has been called to write the Warner Bros. screenplay titled “The Overlook Hotel”.

Reports were swirling about the prequel last summer when writer/producers Laeta Kalogridis (Shutter Island) and James Vanderbilt (Zodiac) were in development with producer Bradley Fischer (Black Swan). This trio believes that they now have a story that is ready to be made into a full film. There are not a lot of details about the movie, but its pretty obvious that there will be some ghosts and other going-ons in the movie. Kubrick’s adaptation to “The Shining” is considered a masterpiece, even if it does not follow the movie to a tee. The question is will Mazzara follow in the steps of Kubrick or will the screenplay fall in line more with the book.

Mazzara did an amazing job on the first half of “The Walking Dead” season 3. During the second half, the show started to take a nosedive and he walked from being the showrunner due to a difference in opinion in the show’s direction in season 4. He has also written for ‘The Shield‘, Hawthorne and Starz’s Crash, which he also created.  If anyone could write a solid screenplay for a movie like this, it would be him. I hope that he takes things from both the book and Krubrick’s adaptation to make spectacular movie.