Ben Chimes In With His ‘Evil Dead’ Review!!! 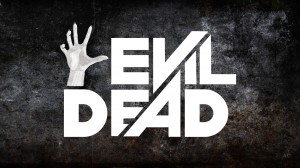 As Fede Alvarez’s remake of the Sam Raimi horror classic came to a close, I heard a guy behind me mutter, “It was just a gorefest.” I resisted the urge to ask, “What exactly were you expecting?” When The Evil Dead came out back in 1981, was it not a gorefest? Was Evil Dead 2 not a gorefest? If by “just a gorefest” he meant that it lacked the humor of the original films, then perhaps he has a point. Gone were the many hat tips to The Three Stooges seen in Evil Dead 2 and Army of Darkness (aside from the “Fake Shemps” listed in the credits). The “Ashisms” were nowhere to be found until after the credits rolled. Still, for the fans who have been there from the beginning, this was more than a gorefest, indeed.

For starters, at the risk of being damned to fanboy hell, I would argue that a few things here actually improve upon the original. In Raimi’s film, five friends venture out to a dull, creaky cabin in the woods for a “fun weekend” of partying and lovemaking. Forget that the cabin is run down and boring, forget that they could have a lot more fun almost anywhere else. Then there is Cheryl, the “odd girl out” who seems to be there for no good reason.

Alvarez’s film does away with all that. The Cheryl character, now called Mia and wonderfully acted by Jane Levy, is a hopeless drug addict. The trip is not about partying, it’s about Mia’s brother, David (Shiloh Fernandez), and three other friends helping her through withdrawals in an isolated location. So instead of sexy time, we get an intervention. In 1981 Cheryl noticed bad things afoot, but no one believed her. Why? In 2013 when Mia sees the shit hitting the fan and wants to leave, her friends won’t let her because they believe she just wants more drugs. In short, it just makes a lot more sense. 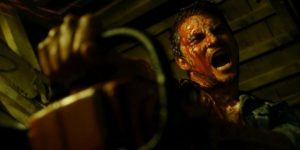 There are some other nice changes, as well. The replacement for the destroyed bridge is more subtle; a moot point, perhaps, given that the rest of the film displays zero subtlety. To that I say: Bravo! We came for the over-the-top blood and guts, after all, the old school human vs demon showdown. The Evil Dead lives up to that, and then some. I haven’t seen a film this violent since last year’s The Raid: Redemption. In fact, I can’t recall a single R-rated movie with this much bloodletting. It squirts, sprays, and gushes everywhere. Needles, nails, an electric meat cutter, and more household items find themselves embedded in flesh. Sam Raimi and Bruce Campbell should be, and seem to be, pleased.

While my taste in movies has changed a lot over the years, there was a time when Army of Darkness was my all time favorite. As a teenager, I introduced it to Bryan Kluger, the head honcho of this very website named after the Boomstick in Army of Darkness. It has all come full circle. Bryan and I used to watch horror movies all the time, we loved the joyful carnage of it all. That’s how this new Evil Dead made me feel. It took me back to those happy days when all I needed was a soda and a VHS from Blockbuster with some zombies in it. Sitting next to Bryan at this movie, as we had done so many times before years ago, I was a kid again for a couple hours.

Maybe The Evil Dead remake isn’t a great movie by any objective standard. I’m not trying to say it’s as good as the originals, overall. Nothing will replace what those films meant to me in my youth, when I would watch the Evil Dead and Back to the Future trilogies on a loop. It does lack the humor of Raimi’s films, and it has a somewhat unnecessary J-horror subplot involving a young girl from the past. Still, the general audience will likely be shocked and awed by all the red stuff, while longtime fans will adore the many nods to their cherished originals. Against my better judgment, it’s a lot of fun, damn it. I’m going to see it again tonight.

Lastly, if I can play director for one moment, I’ll just say there is one area where Alvarez dropped the ball. When a character says of morning, “We’ll be dead by then!” We all know the line should have been, “We’ll be dead by dawn!” Am I right or am I right?