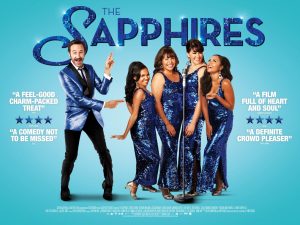 Australian director Wayne Blair makes his feature film debut with a little gem of a film in “The Sapphires.”  (see what I did there?)  The themes of the film are not really new to American audiences.  This is a musical-ish film about a traveling group of female aborigines Australians who realize their dream of performing in front of huge crowds, except that these huge crowds are American soldiers in Vietnam in 1968.  With this backdrop of a war torn country, we are exposed to the ideas of following your dreams, finding love, and living through the racial turmoil that was so prevalent during this time.

These really are not novel subjects, but the presentation; especially the aboriginal perspective which is fairly novel to American audiences, creates an experience that is quite memorable on screen.

Three sisters, and one cousin, audition for a gig in their tiny Australian town and end up a traveling group of musicians.  Though they start off as a country band, they quickly adapt to the Motown music that is demanded from their audience.  They travel Vietnam with their manager, learn about life, love, culture, etc… 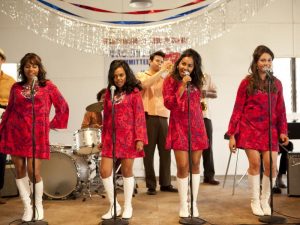 It’s hard to not downplay the story, because it really is cliché after cliché that we’ve seen a hundred times before, including the strong sassy woman who leads the group.  But the interesting is, in spite of its seemingly recycled subject matter, the film brings something special to the screen.  The performances are strong throughout, delivered by relatively unknown actors.  Perhaps the fact that they are so unknown makes them more believable, delivering even the most nuanced of lines with genuine naivety that is actually quite endearing.  The musical performances are pretty amazing, spearheaded by X Factor alumna Jessica Mauboy, and are already gaining this film the tile of “Australian Dream Girls.”  And this of course, this wouldn’t be a romantic comedy without, well, comedy, which is brought in waves by Chris O’Dowd.  Throughout the film he plays the awkward I wish I wasn’t so white guy who is majorly flawed but has a heart of gold.  Again, his character is nothing new, but his performance is thoroughly entertaining. 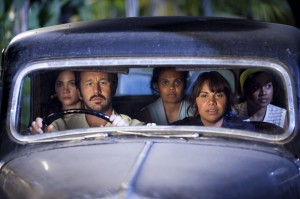 So yes, piece by piece this film may sound not too great, but the sum of its parts is actually an incredibly enjoyable well put together film with a fantastic soundtrack and some surprise performances.  It keeps you smiling throughout, and ultimately is pretty much the definition of a feel good film.  Well recommended.