Joss Whedon Is Bringing Back ‘Firefly’ for One More Season Via Kickstarter!!! 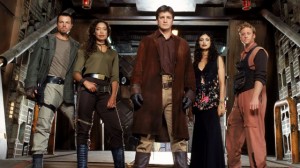 Good news, everyone.  well, maybe the best news ever.  Joss Whedon has just announced that due to the success of the ‘Veronica Mars‘ Kickstarter campaign, which has raised over $4.3 million, that he and the Fox Network are going the same route to get one more season, consisting of 13 new episodes of their hit series ‘Firefly‘.  Joss said that everyone is on board to come back to reprise their roles, minus the deceased characters, however he hinted that we might see them in the new series in flashbacks.

Joss said he will be directing the first two episodes and said that Nathan Fillion has expressed interest in directing one or two episodes as well.  “With the huge success of Rob Thomas’ ‘Veronica Mars’ campaign, I wanted to see if we and our loyal brown coats could do the same,” Whedon said. “I know we have a decent fan base out there and we want to give the fans what they have been clamoring for years. We’re all very excited about this.”

He went on to note that this new season will take place two years after the events of ‘Serenity‘ and follow the adventures of the crew.  That’s all Whedon would divulge for now.  There are some amazing gifts they are awarding for backers of the Kickstarter campaign including props, signed posters and scripts, set visits, and cameo roles for the more expensive donations.  The campaign has a goal of $25 million right now, and if they reach their goal, Fox said they will match what they make, but they have to raise $25 million.  And it looks like it is already rising fast.

I’m sure glad to see that via Kickstarter, we are finally able to get the shows we want.  I hope this works out for everyone as this is amazing news. If we were living in a perfect cosmos, this would actually happen, but it’s not going to.  Happy April Fool’s Day!!