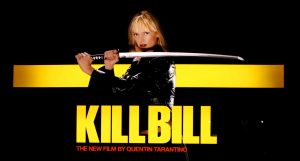 Quentin Tarantino has just announced that he will be returning to the blood spattered bride saga with ‘Kill Bill‘ Volume 3 and 4. Tarantino is hot off the press tour junkets and award ceremonies for his recent successful ‘Django Unchained‘ film. He said that he is going to take a couple of months to decompress then jump right into pre-production of the next two ‘Kill Bill‘ films.

In a recent interview with a London based talk show, Tarantino revealed that he was working on the script closely with Uma Thurman for the sequels during the production of ‘Django Unchained‘ and that he plans on polishing the full screenplay within the next couple of months. Tarantino said, “A lot of time has passed since we have seen the bride re-unite with her daughter, and she deserved some rest. But we think now she is ready for the next chapter in her life, and things do not go Kiddo’s way.”

That’s all Tarantino said about the film and did not elaborate on casting decisions, but did state that Thurman will indeed reprise her role.  He will scout locations in Japan, Moscow, and here in the U.S.  He went on to say that the Weinsteins wanted to split the next part in the saga into two films like the first two, because it proved more lucrative in ticket sales, as he says the script so far has over 260 pages. There was no word on if there will be an animated sequence like there was in the first film, but we hope there is.

This raises a lot of questions.  One being, will the bride be fighting agains Vernita Green’s daughter from the first film, or will she take on a whole different or perhaps rival assassination squad from her time in the gang.  There are so many possibilites.  However, none of them will come to fruition, because this is fake.  Happy April Fool’s Day.