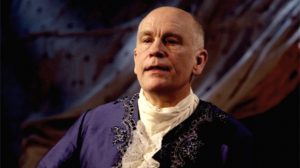 Goodbye Hugh Laurie and Hello John Malkovich. NBC has announced that John Malkovich will star as Blackbeard in the 10 episode series ‘Crossbones‘ from ‘Luther‘ creator Neil Cross. If you remember, Laurie was scheduled to take this role, but he did not commit.

The series is set in 1715 on the Bahamian Island of New Providence where Blackbeard rules over thieves, outlaws and other misfits. The series, which was scheduled for this season, will most likely run next season. I am pumped about this casting change.  Malkovich has been a versatile actor for decades starring in movies like ‘Con Air‘ and ‘Transformers: Dark of the Moon‘. I know that if anyone can carry a series like this, he can! However, I’m shocked that he is taking the pirate route on the small screen.