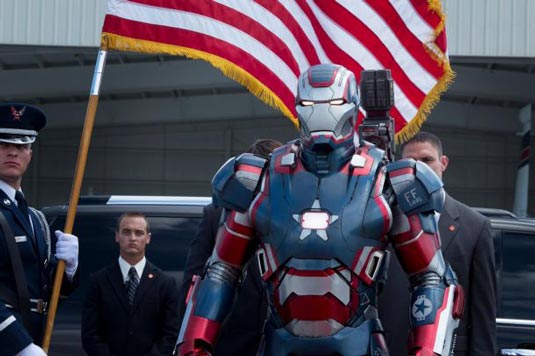 It’s Super Bowl Day, meaning us fellow movie geeks are only interested in a couple of things. 1) Movie trailers. 2) The commercials. 3) Food. 4) The Puppy Bowl. Not necessarily in that order. I mean, the Puppy Bowl is really the only time out of the year where the entire world is at peace and everything is a bit brighter. But, this isn’t about the Puppy Bowl.  This is about some really amazing movie trailers that will be shown during the big game this year.  We can expect a new ‘Iron Man 3‘ trailer, a new ‘World War Z‘ trailer, ‘The Lone Ranger‘ trailer, and another ‘Oz‘ trailer.  Plus some other surprises.  Below are the trailers you can see before anyone else does.  Enjoy.

‘WORLD WAR Z’ – Max Brooks’ epic tome of a fictional time of global war against the undead is brought to life in this Paramount Pictures/Plan B production. Quantum of Solace’s Marc Forster directs from a script by Changeling scribe J. Michael Straczynski. Brad Pitt stars as a journalist covering the disaster, with Mireille Enos, Anthony Mackie, and Bryan Cranston heading up the rest of the cast.

‘IRON MAN 3’ – Marvel’s “Iron Man 3” pits brash-but-brilliant industrialist Tony Stark/Iron Man against an enemy whose reach knows no bounds. When Stark finds his personal world destroyed at his enemy’s hands, he embarks on a harrowing quest to find those responsible. This journey, at every turn, will test his mettle. With his back against the wall, Stark is left to survive by his own devices, relying on his ingenuity and instincts to protect those closest to him. As he fights his way back, Stark discovers the answer to the question that has secretly haunted him: does the man make the suit or does the suit make the man?

‘THE LONE RANGER’ – From producer Jerry Bruckheimer and director Gore Verbinski, the filmmaking team behind the blockbuster “Pirates of the Caribbean” franchise, comes Disney/ Jerry Bruckheimer Films’ “The Lone Ranger,” a thrilling adventure infused with action and humor, in which the famed masked hero is brought to life through new eyes. Native American spirit warrior Tonto (Johnny Depp) recounts the untold tales that transformed John Reid (Armie Hammer), a man of the law, into a legend of justice-taking the audience on a runaway train of epic surprises and humorous friction as the two unlikely heroes must learn to work together and fight against greed and corruption.

‘OZ: THE GREAT AND POWERFUL’ – Disney’s fantastical adventure “Oz The Great and Powerful,” directed by Sam Raimi, imagines the origins of L. Frank Baum’s beloved wizard character. When Oscar Diggs (James Franco), a small-time circus magician with dubious ethics, is hurled away from dusty Kansas to the vibrant Land of Oz, he thinks he’s hit the jackpot-fame and fortune are his for the taking-that is until he meets three witches, Theodora (Mila Kunis), Evanora (Rachel Weisz) and Glinda (Michelle Williams), who are not convinced he is the great wizard everyone’s been expecting. Reluctantly drawn into the epic problems facing the Land of Oz and its inhabitants, Oscar must find out who is good and who is evil before it is too late. Putting his magical arts to use through illusion, ingenuity-and even a bit of wizardry-Oscar transforms himself not only into the great wizard but into a better man as well. When small-time magician Oscar Diggs (James Franco) pulls one flimflam too many, he finds himself hurled into the fantastical Land of Oz where he must somehow transform himself into the great wizard-and just maybe into a better man as well.

‘SNITCH’ – In the fast-paced action thriller SNITCH, Dwayne Johnson stars as a father whose teenage son is wrongly accused of a drug distribution crime and is looking at a mandatory minimum prison sentence of 10 years. Desperate and determined to rescue his son at all costs, he makes a deal with the U.S. attorney to work as an undercover informant and infiltrate a drug cartel on a dangerous mission — risking everything, including his family and his own life.

‘STAR TREK INTO DARKNESS’ – The Star Trek franchise continues with this follow-up to 2009’s J.J. Abrams-directed reboot. Abrams and Bryan Burk handle producing duties on the sci-fi production, from a script by Damon Lindelof and the writing team of Roberto Orci and Alex Kurtzman.

‘FAST AND FURIOUS 6 – The Fast and the Furious franchise continues with this sixth entry from Universal Pictures. Director Justin Lin returns to helm.

You’ll have to wait to watch this during the game.