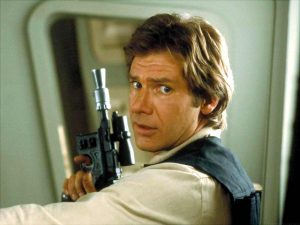 We are hearing reports that Disney has made a deal with Harrison Ford to reprise his role as Han Solo one last time for the upcoming ‘Star Wars‘ films, which are being helmed by J.J. Abrams. Now we all know that Ford has said in the past that he will never do this role again, but looks like he has changed his mind.  I mean, why wouldn’t he?

This could be amazing as we could see an old Han Solo and old grey haired Chewbacca.  I think Abrams is doing a lot of good things already with this.  We expect full official statements from all camps involved very soon, but check out the video for the scoop. I think ‘Star Wars’ will be classy once again.

I can only hope J.J. Abrams will have a shoot-out scene with Solo where he indeeds shoots first, putting to rest that age old question. And hopefully, Disney will finally release the original trilogy unaltered on blu-ray. Then all would be right in the world. This is such exciting news.