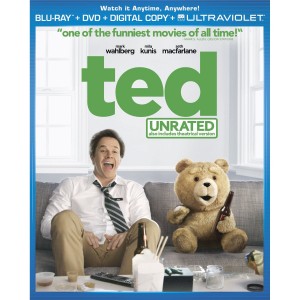 ‘Ted’ is hilariously funny.  I didn’t expect it to be as humorous as it was, but I busted a gut from start to finish.  I’m not a huge ‘Family Guy’ fan. so I admit, I was a bit apprehensive to watch a feature film written and directed by Seth MacFarlane.  I was quite surprised as to how warm and witty it was.  After the first 15 minutes or so of seeing an animated teddy-bear come to life, I really didn’t see it as a teddy-bear, but rather an actual person.  MacFarlane captured a genuine and heartwarming film with an ultra raunchy and vulgar kick at every turn.

Let’s get one thing straight here.  ’Ted’ is not for young kids.  The humor is not about farts, burps, or toilet humor.  It’s more drug, sex, booze, and rock n’ roll humor with a teddy bear who uses the word “fuck” every 10 seconds and can throw one hell of a party with all the hookers, celebrities, and drugs you can get.  It’s very rare nowadays that a film can genuinely make you laugh almost non-stop.  And with this being MacFarlane’s directorial debut, he hit the mark spot on.

In the first scene of the film, we hear a narration as if we are being read a bedtime story as we see several young kids playing in the snow at Christmas time.  They celebrate their friendship by beating up the neighborhood Jewish kid, who in the middle of this beating all yell to the unpopular kid who walks by to get lost.  Even the jewish kid yells “Get Lost”.  That unpopular kid makes a wish that night for his teddy-bear to come to life.  Well, that wish is granted.  Come to find out this newly alive teddy-bear, named Ted, is seen by everyone and even becomes a celebrity for a while, going on talk shows, posing for the cover of magainze, and so on.  Years pass and the unpopular kid, John Bennet (Mark Wahlberg) are in their 30s, and their friendship is still as strong as ever.  They spend their days smoking pot, drinking, and watching old sci-fi films.

John lives with his beautiful girlfriend Lori (Mila Kunis) of four years and she is as cool as you’d want her to be.  She makes vulgar jokes and is not above smoking and watching sci-fi films either.  However, she wants her beau, John to get his life together and move on to become an adult.  This means that Ted has to move out.  This happens after John and Lori come home after their four year anniversary to find Ted sitting on their couch with five hookers and a legendary game of Truth or Dare’.

Ted moves out while John tries to grow up from his constant pot smoking and dead end job.  From here on out, it’s a similar romantic comedy that we have all seen before with a splash of a kidnapping thriller added in for good measure.  In several moments of ‘Ted’, the film plays out like an episode of ‘Family Guy’ complete with tons of movie references and quick flashback cutaways to show previous events.  There is a treasure trove of cameos in ‘Ted’.  You’ll recognize pretty much all of the voice actors from ‘Family Guy’ as well as some other great and laughable cameos.

Above, I stated that MacFarlane is a huge fan of sci-fi and cult films.  Well, one of the big overall story arcs of ‘Ted’ is the film ‘Flash Gordon’ and Sam Jones himself has a pretty hefty role in the film playing, well, himself.  It’s one of the funnier cameos I have seen in a long time.  As for Wahlberg and Kunis, they are brilliant in their roles.  They are very likable characters.  But the star of the movie is ‘Ted’.  That little animated bear shines and owns every part of the movie screen.  The CG on the bear itself is out of this world.  It’s some of the best visual FX in a while and can compete with any of the mega budget sci-fi films of recent years.  Not one time did the bear look fake.

‘Ted’ is hilarious from start to finish.  You will walk out of the theater with your mouth and sides hurting from laughter.  All hail ‘Ted’! 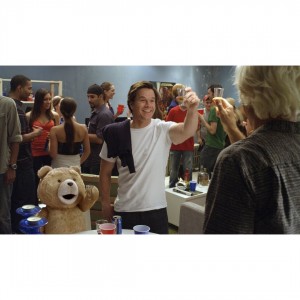 ‘Ted’ comes with an impressive 1080p transfer and is presented in 1.85:1 aspect ratio. McFarlane shot the movie digitally and it looks fantastic. The colors are bright and vibrantly shine through.  There are tons of greens, blues and light browns throughout, as well as a lot of whites, which could have been drastic for the image of the film, but luckily nothing suffered. The detail is impeccably sharp as you can make out each hair and every stitch in Ted. Truly remarkable. The skin tones are natural and smooth too.  The blacks run deep and inky and I did not notice any aliasing or edge enhancement. This is a top notch video presentation.

This disc comes with an amazing lossless DTS-HD 5.1 audio mix and for being a comedy, sounds amazing. Now, I will say this, there are a few action scenes in this as well and everything comes across nicely. The dialogue is crystal clear and is very easy to understand, even with the horrid Boston accents, which are situated on the fronts nicely.  The directionality is handled well here too as the actor’s voices are placed on the appropriate surrounds when off screen. During the car chase sequence and thunderstorm, the surrounds and bass kick in and sounds great and loud.  The ambient noises of people chattering and natura and city sounds are rendered nicely too. The soundtrack and score are very good here and never drown ou the dialogue or sound effects. Great audio presentation.

THE EXTRAS
Audio Commentary with Seth MacFarlane, Alec Sulkin, and Mark Wahlberg – This is a fun commentary to listen to. The director, writer, and star of the film provide a scene specific commentary track, which is informative about the making of the film with some very funny stories from making the film.  They all had a great time making this. It’s weird though, Walhberg disappears from the commentary after a few minutes in and never returns. Reminded me of when Sean Astin disappeared from ‘The Goonies’ commentary track.

Gag Reel (7 mins.) – A good collection of flubs and outtakes from the cast. There were a few laughs had here.

Ted: The Making of (25 mins.) – This was actually a great behind the scenes featurette, which showed the making of the film, which includes some interviews and even shows that McFarlane himself wore a motion capture outfit and acted out Ted. Very cool.
Deleted Scenes (15 mins.) – Here are a few deleted  scenes that didn’t make it to the final print of the movie and we can see why. Nothing really advances the story and none of it is particularly funny.

Alternate Takes (11 mins.) – I enjoyed this extra as it was just different lines of dialogue from some of the best and funny moments of the film. It shows just how funny each of these people are and how well they improv and come up with amazing jokes.

Teddy Bear Scuffle (6 mins.) – Here is a quick look at the amazing fight scene from the film between Wahlberg and his teddy bear. It was cool to see how they did this epic fight scene.

‘Ted’ is a very funny film, one of the funniest of 2012 in fact. It is even as funny upon multiple viewings and hasn’t gotten old yet. The video and audio are top notch with some great extras here. The difference between the unrated and theatrical cut is about 7 minutes with some different dialogue and extended scenes. This blu-ray release is highly recommended.