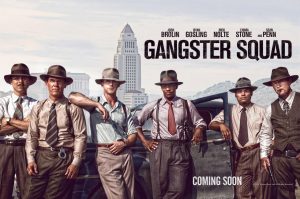 ‘Gangster Squad‘ lacks depth, character, and mild storytelling, but with its amazing cast of actors, over-the-top violence, and cartoony vibe, I left the theater highly entertained.  Instead of playing out like a true noir gangster film from the 40s, director Ruben Fleischer (Zombieland) has gone the route of making this gangster film like and R rated ‘Dick Tracy‘ mixed with a Saturday morning cartoon, which isn’t necessarily bad, but instead of getting story and character, we get blood and guts.

We focus on a group of guys who are all part of the police force in 1940’s Los Angeles who go off the grid to take down the infamous Mickey Cohen (Sean Penn) and his endeavors, before he and his minions take over LA.  It’s all about the glitz and glamour, rather than developing a cohesive plot.  I’m also curious to how much was changed from the original cut of the film, since Warner Bros. decided to delay the film from it’s release date last year due to the Aurora, Colorado theater shooting.  There was one scene in the trailers that showcased a group of guys opening fire from behind a movie screening on the audience of Grauman’s Chinese Theatre. That being said, there is still plenty of shoot-outs and blood and guts, but just not in a theater.

Police chief William Parker (Nick Nolte) does not want to see his beloved city fall to Mickey Cohen, and since Cohen has half the state already in his back pocket, he never gets arrested or is asked to pay for his crimes.  So Parker takes things into his own hands and recruits the honorable and straight-edged war hero Sgt. John o’Mara (Josh Brolin) to lead a team of guys to take out Cohen by any means necessary.  And just like every character in the film, there is no depth or meaning to them, other than one different trait, so that you can tell them apart. 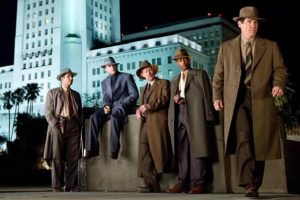 O’Mara enlists the help of a quick-draw sharpshooter/cowboy Max Kennard (Robert Patrick), his rookie cop friend Navidad Ramirez (Michael Pena), a black cop who is quick with a knife Coleman Harris (Anthony Mackie), a smart technology wizard who can set up bugs in the enemies housing Conwell Keeler (Giovanni Ribisi), and O’Mara’s young partner Sgt. Jerry Wooters (Ryan Gosling), who uses his charm to win Cohen’s new squeeze Grace Faraday (Emma Stone). That’s one hell of a cast, but all of them besides Brolin and Gosling don’t receive enough screen time to care or show their skills.

Since Cohen has already made a name for himself in LA in the form of drug, prostitution, and extortion rings, he is ready to control the entire country by forming a company to control all of the wire bookmaking West of Chicago, thus making enough money to control and buy anybody out.  It is up to this ‘Wild Bunch‘ type of guys to take him out before his company is up and running.  Most of the film is a series of half-assed planned strikes on Cohen’s businesses, which don’t always lead to a success.  But as time goes on, Mickey is figuring out that it isn’t a rival gang trying to take him down, and things must move swiftly to prevent Cohen from taking over the city. 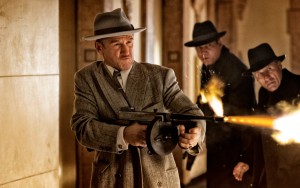 Everybody is over-the-top in the film, especially Sean Penn‘s Mickey Cohen.  News reports on the actual Mickey Cohen showed him to be a very fun and charismatic guy who had all people with power wanting to be in his presence, and never showed his sadistic side in the public eye.  That’s not the case with this film.  Penn plays Cohen as a complete and brutal psychopath who is not above setting people on fire, putting a drill through people’s heads, and cutting people in half.  There is not appeal to him whatsoever, other than just being or trying to be the ultimate bad guy.

In addition to the cast being amazing, the production and set design is top notch as well.  The filmmakers did an impeccable job of turning current Hollywood into 1940’s Hollywoodland with all of the fun joints on the strip, costumes, and vehicles. On the other hand, there are plenty cheesy one-liners, montages of violence, and a lack of setup and character development. But, because this film is mostly about immediately fulfilling your action and violence appetite, thus making it a highly entertaining film.