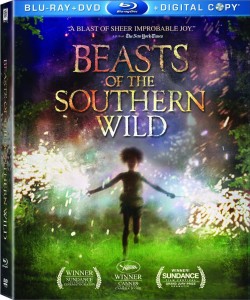 Beasts of the Southern Wild is no doubt in my top-10 list for best films of 2012.  I know most of you haven’t heard of this film, but rest assured, once you see this film – and I urge you to see this film as fast you can- you will not forget it.  Beasts of the Southern Wild is Benh Zeithlin’s feature-length directorial debut, and even though he is only 29 years old, he has a poetic vision that is on par with Stanley Kubrick and Terrence Malick.  Zeithlin’s attention to detail allows the movie to successfully portray backwater Louisiana, magical realism, and a culture’s determination and strength. It is unlike anything I have seen.  Not only is this film entertaining, smart, and creative, it is also important in that it shows a very realistic portrayal of some of the poorest people in present day America as they struggle to survive disasters both man-made and natural.  This is what every indie filmmaker should strive for.

Beasts of the Southern Wild was shot in the swamps and rural areas of southern Louisiana.  According to Quvenzhane Wallis and Dwight Henry (the two main actors), Zeitlin did not want anything simulated.  If the audience sees actors in a body of water, that water was an actual ocean.  If there were animals on screen, those were live animals with the real actors (minus one shot that was too dangerous to be shot with a live animals).  In order for everything to look real, it had to be real.

The film focuses on the outlandish and surreal life of a six year old girl named Hushpuppy (Quvenzhane Wallis) and her father Wink (Dwight Henry) who live on the outskirts of and separate from a Southern Louisiana city in a place they fondly refer to as “the prettiest place on Earth” or “The Bathtub”.  In reality, the Bathtub is a depressingly isolated place consisting of dense swamp land, make-shift houses on stilts, filth and trash.  Hushpuppy spends most of her days walking around in a t-shirt, underwear, and rainboots looking for animals and listening to their heartbeats.  The locals take pride in being societal outcasts spending their days surviving, drinking, dancing, and partying.  They have no desire whatsoever to be civilized or become part of modern day society.

Hushpuppy firmly believes that she, the animals, and the trees are all interconnected and that if something bad happens to one, everyone will be affected.  She has very little recollection of her mother, and her father Wink is a frightening and abusive man at times. But Wink also teaches Hushpuppy to be strong and face whatever conflicts come her way. Although their relationship is tumultuous and sometimes violent, they really love each other and look out for one another. After a very powerful storm passes over The Bathtub and Wink blows up a levee to save his home, The Bathtub becomes an area of evacuation.  Hushpuppy and the others are forced onto the mainland and into society to receive medical treatment.  As Wink is in declining health, it’s up to Hushpuppy to become “the man” of the house and look and take care of her own.

Beasts of the Southern Wild is loosely based on a play by Lucy Alibar titled Juicy and Delicious. Zeitlin and Alibar (who have been close friends for years) set out to write a script together, and what they came up with reflected some of the overarching ideas found in Alibar’s play.  But the film also was reminiscent of the societal suffering and loss caused by Hurricane Katrina. The result is something special and undeniably unique.

Both Wallis and Henry had not had any previous acting experience before this film, but after auditioning thousands of people for the roles, Zeitlin chose the duo we see on film.  Henry has a certain passion that I’ve only seen in a handful of actors, showing how true his nature is to his own child and what he would do to protect her.  And Wallis is a very smart and brilliant young girl who pulls off a tough and emotional performance.  I’m glad Zeitlin didn’t cast known actors, because as Henry said in our interview, “…if Denzel Washington came in here and tried to play Wink, he couldn’t.  He hasn’t been where I have before.”  You see, Henry is a local of New Orleans and lived and stayed in New Orleans through Katrina.  He is all too familiar with tragedy and loss.

I have no doubt that Beasts of the Southern Wild will go on to win more awards in addition to the awards it has already won at Cannes.  It’s a visually stunning and meaningful film, and it has some of the best acting I have seen in recent memory.  If Beasts of the Southern Wild is playing near you this summer, I beg you, go see this film.  It’s a milestone in filmmaking and it will haunt you for a long time thereafter. It’s simply breathtaking. 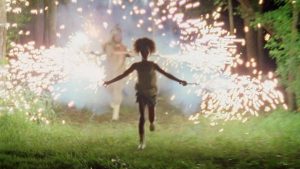 ‘Beasts of the Southern Wild’ looks amazingly authentic to to the 16mm film it was used to shoot with, but don’t let that get you down, as the film looks incredibly sharp.  The reason for the 16mm film rather than the HD digital cameras a lot of directors use today, was to keep the shooting style rough, just like the life in the bathtub.  However, the colors are bright with detail pretty good, especially in the daytime scenes outside.  The blacks are deep and inky and comes with a layer of fine grain to give it that filmic look.  The film itself is in a softer tone and just looks great, as good as when I saw it at the theater.

This release comes with an impressive lossless DTS-HD 5.1 audio mix and it just sounds great.  The dialogue is crystal clear and comes across the fronts very nicely without any hissing or cracks.  That being said, because of the characters extreme dialect and accents are complicated to understand, but that’s all part of the experience.  The ambient noises are great, with the epic hurricane-like storm, and when the Aurochs come rumbling into town, the bass kicks into high gear and packs a punch.  The score was one of my favorite scores of the year and sounds flawless over the speakers and never drowns out the dialogue.  Amazing audio presentation.

‘Beasts of the Southern Wild’ was my number 1 favorite film of the year.  And I hope it sweeps the Oscars this year, because it truly deserves it.  It’s writing, direction, acting, and music are all flawless and perfect.  This bluray release has great audio and video presentations as well as some very good extras.  I really hope Criterion snatches this up and releases it under their label too.  My highest recommendation goes to this one.