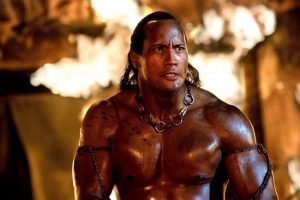 Yes, there is going to be a live-action version of Hercules coming to the big screen.  Dwayne ‘The Rock’ Johnson is set to play Hercules. That’s the good news.  The Rock is so charismatic and fun, that I’m willing to watch ANYTHING with him in it.  He just brings life to any film.  I’ve heard rumors about him playing Hercules before, but now they are set in stone.  I’ve always wanted The Rock to play Johnny Bravo in a live-action adaptation of the cartoon.

The bad news is that Brett Ratner will be directing this film.  Ratner is known for directing all 3 ‘Rush Hour’ films, the 3rd X-Men movie, and the recent ‘Tower Heist’.  Needless to say, he isn’t very good with doing quality work.  Sure, ‘Rush Hour’ 1 and 2 were fun, but that’s the extent of it.  For Hercules, you need someone with talent and someone who understand the character and their universe.  Ratner is not that person nor will he ever be.

If I was The Rock, when I heard that Ratner was attached to direct, I would have left the project.  The screenplay was adapted by Ryan Condal from comic company Radical Studios on their specific story ‘Hercules: The Thracian Wars’.  Evan Spiliotopoulos revised the screenplay, who has only written direct-to-video Disney animated films. Production is expected to start early next year.

The Thracian Wars synopsis reads: Fourteen-hundred years ago, a tormented soul walked the Earth that was neither man nor god. Hercules, powerful son of the god king Zeus, received nothing but suffering his entire life. After twelve arduous labors and the loss of his family, this dark, world-weary soul turned his back on the gods, finding his only solace in bloody battle. Over the years he warmed to the company of six similar souls, their only bond being their love of fighting and the presence of death. These men and woman never question where, why, or whom they go to fight; only how much they will be paid. Knowing this, the King of Thrace has hired these mercenaries to train his men to become the greatest army of all time. Hercules begins to question King Cotys’ motives when he takes his army out to battle and sees them practice on innocent men, women, and children of their neighbors. Deep in his soul something stirs, but is it enough to stop a mad king and his army of the damned from marching across Greece – or even Olympus itself?!

One thought on “There’s Good News and Bad News for The Upcoming Live-Action ‘Hercules’ Film!!!”