Make Sure You Have HBO for a Conversation with Mel Brooks!! 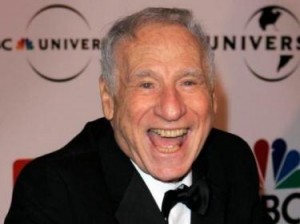 From the groundbreaking TV series “Your Show of Shows” to landmark films like “Blazing Saddles” and “Young Frankenstein,” Mel Brooks has been one of the most influential voices in comedy. Now, this entertainment legend looks back on his remarkable career in MEL BROOKS STRIKES BACK!, debuting MONDAY, DEC. 10 (9:00-10:00 p.m. ET/PT), exclusively on HBO.

Appearing onstage with Alan Yentob, creative director for the BBC, at the Geffen Theater in Westwood, Cal. before a live audience, Brooks reviews his career as a writer, director, actor, producer, composer, failed ballet dancer and comedian. The special looks at the Brooklyn native’s early life, show-business influences, early career and ascension as one of Hollywood’s most successful writers and directors.

MEL BROOKS STRIKES BACK! also features clips from some of his classic movies and TV work, including “Your Show of Shows,” featuring Sid Caesar and Carl Reiner, one of Brooks and Reiner’s “2000 Year Old Man” routines and the movies “The Producers,” “Blazing Saddles” and “High Anxiety.” Brooks also takes questions from the audience, discussing his experiences in World War II and the origins of the song “Retreat,” which he performs in a clip with longtime collaborator Ronny Graham.

Among Brooks’ other classic comedy films as director, writer, producer and/or actor are “History of the World Part 1,” “Silent Movie,” “Spaceballs” and “Robin Hood:  Men in Tights.” “Blazing Saddles,” “The Producers” and “Young Frankenstein” all appear on the AFI’s list of Funniest American Films. He also produced the Oscar®-nominated drama “The Elephant Man,” as well as “My Favorite Year” and “The Fly,” among other Brooksfilms movies, and co-created, with Buck Henry, the hit TV series “Get Smart.”

Mel Brooks is one of the few artists who have received an Oscar®, a Grammy, an Emmy® and a Tony. He won an Oscar® for writing the 1968 film “The Producers,” a Grammy for Best Spoken Comedy Album in 1999 for “The 2000 Year Old Man in the Year 2000” and two other Grammys in 2002, for Best Musical Show Album for the Soundtrack of “The Producers” and Best Long Form Music Video for the DVD “Recording the Producers – A Musical Romp with Mel Brooks.” Brooks has won four Emmys®, one for Outstanding Writing Achievement for a Sid Caesar special and three consecutive awards for Outstanding Guest Actor in a Comedy Series for “Mad About You.” He won three Tony Awards for the 2001 musical “The Producers,” for Best Musical, Best Original Musical Score and Best Book of a Musical. Overall, the show received 12 Tony Awards, a record for a musical.

On Nov. 13, the DVD/CD box set “The Incredible Mel Brooks: An Irresistible Collection of Unhinged Comedy” will be released by Shout! Factory. The set is a veritable treasure trove of all things Brooksian, a laugh-filled celebration of his illustrious career that includes special tributes, memorable performances and rare archival TV footage.