While compiling this list, I realized there was no way I could choose only 10 of the best horror soundtracks. So, because I thrive on being different, I am very pleased to bring you 13 of the choicest, rarest, and most kick ass horror soundtracks that I know of. Every one of the following are so good, it was really difficult to rate them from best to bestest.  Each and every one of these titles hails from the very late 70’s thru the 80’s…how incredibly biased of me.

I hope you enjoy it.

Being this is one of my favorite Werewolf films, I had to include it here simply because I love an album filled with diversity. How much more diverse can you get than disco-y love themes next to howling wolf sounds, I ask you? Besides, that cover art kicks major ass. 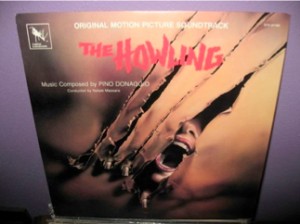 Claudio Gizzi is a little-known Italian soundtrack composer, and he chose his films wisely. This is a gorgeous soundtrack, filled with mostly classical type themes, and they are beautifully executed. He also composed Andy Warhol’s Flesh for Frankenstein, and the import CD version has both soundtracks on it, but it will cost you over 100 bones.

OK, it’s more romantic-sounding than scary. But guys, you can use this to your advantage; play this when you wanna get down-n-dirty with the ladies. They’ll think you’re so cultured, playing some beautiful, classical music when in fact you’ll be luring them into your wicked web…just like Dracula, right? You’re welcome. 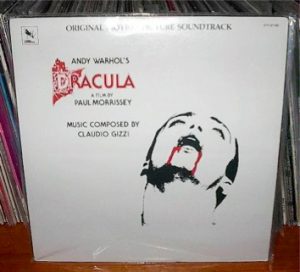 Every John Carpenter soundtrack is rare and desirable, but this is the only one that features 50’s & 60’s pop tunes in place of spooky, scary themes. Not to worry, there is one token John Carpenter synthy track–and I do wish there were more. But how can you argue with Little Richard, Buddy Holly and George Thorogood?? Solid album, and a must for the Carpenter collector. 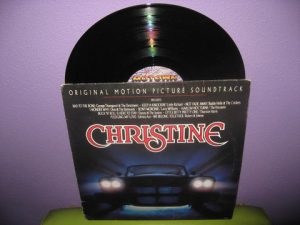 Oh Holy Freak Out Batman! Here’s another rarest-of-the-rare soundtracks I would be greatly amiss not to include. Complete with 3D cover and 3D glasses, this album is more of a collector’s item than anything else, much like the Sixteen Candles soundtrack on vinyl. There are only a few tracks per side, but we’re talking about Friday the 13th here, one of the most iconic horror film franchises of all horror history. 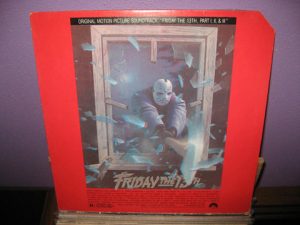 Another diverse album featuring a disco horror theme, what’s not to love? I don’t know about you, but this film scared the bajeezus out of me when I saw it in the theater as a kid. Who knew I would grow up to love it and the soundtrack so much? Also, any album that includes a spooky harpsichord track is aces in my book.

Lalo Schifrin has a very diverse catalog of scores and soundtracks that he has composed over the years including Mission Impossible, Dirty Harry, Bullitt and Magnum Force just to name a few. Bitchin’. 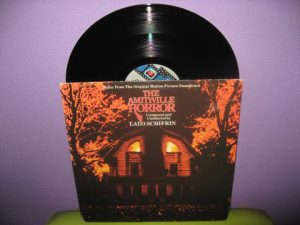 OK, this album has one of my all-time favorite covers, and it is so deliciously rare, that’s probably what makes me love it even more. Never officially released on CD until 2011, (and available for purchase on Amazon) vinyl and cassette tape were your only choices for this awesome album. The bonus of the CD version is you get several additional tracks of the incidental music from the film, most of which are not included on the vinyl version.

Admittedly, there are a few uber-cheesy Pop/Rock tracks on the album, but hey, it’s got The J.Geils Band at least! And Brad Fiedel (The Terminator) provides some super sexy, super tasty tracks. For example, remember the slow dance scene in the club, ladies? Uh huh, that’s what I’m talkin’ about! 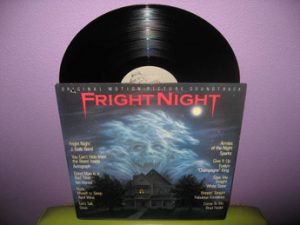 7) A NIGHTMARE ON ELM STREET 4: THE DREAM MASTER

Ohh lordy…I am so happy that this even exists. Not only is Part 4 my favorite of the franchise, it’s also the best soundtrack of the bunch. Featuring just one ‘spooky music’ track from the film, it’s only there to serve as a reminder that you’re listening to a horror film soundtrack.

The rest of the album is all Pop and Rock, and some of it decidedly cheesy (hey, what do you expect, it’s 1988 fer cripes sake) but the two stand-out songs here are ‘Back to the Wall’ by the Divinyls (and no, this aint ‘I Touch Myself’ it’s sooo much better) and, best of all, ‘Therapist’ by Vigil. This album is the only place you can get this particular track, and it’s worth the price you’ll pay for this very rare album alone. Kick ass cover art too! 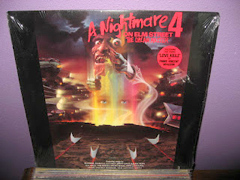 Headbangers rejoice! This is one of the very few heavy metal horror soundtracks available. Where else are you gonna find Motorhead, Iron Maiden, Goblin and Andi Sex Gang all on one album?? You probably won’t. This is one heckuva rare album to find, and if you do, there are a few different cover versions to be had. The one featured in the photo here is a Canadian pressing, and my personal favorite cover.

Some people don’t realize Jennifer Connelly didn’t get her start in Labyrinth, she’s much younger in this film, I give her much props for handling all those bugs without freaking out.

But I digress, this album is filled with hard-hitting, heavy metal tracks, screaming vocals and spooky themes. There is an alternate version including all of Goblin’s incidental music from the film. Classic Dario Argento. 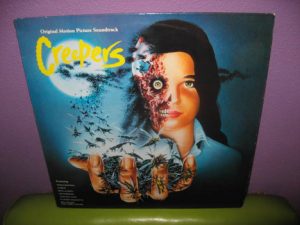 John Harrison has enjoyed a lengthy career in the soundtrack biz, and Creepshow is one of the major highlights. This whole album is creepy, and filled with music to make you keep the lights on. It’s also fun to watch the film and match up the tracks to their accompanying stories. Also one of my top five horror films, this soundtrack is one you will play all year long. I know I do! Curiously, this is readily available on CD, but the vinyl is really hard to find and will cost you a pretty penny. But again, worth.every.damn.penny. 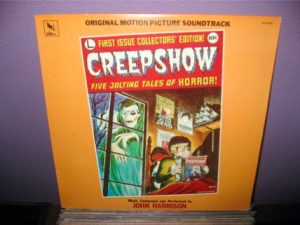 4) RETURN OF THE LIVING DEAD

Where do I even begin with this one? It’s probably one of the best Punk Rock compilation albums out there, and it just happens to be attached to one of the best zombie films out there. Included are tracks from The Cramps, T.S.O.L, 45 Grave, The Damned and SSQ who does Trash’s famous naked-in-the-cemetery dance theme. It just doesn’t get much cooler than this album, from cover art to every last song.

Christopher Young quickly became one of my favorite horror soundtrack composers after I heard this for the first time. Dark Carnival meets sweeping, scary themes full of suspense, it just doesn’t get much better than this. This is the one to listen to with the lights low, candles burning, with nothing but evil on your mind. Heh. Freaking fabulous cover art too. 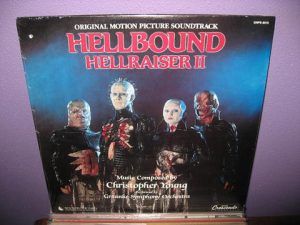 So close to number one, it could only be number two. Yet another solid, solid Punk Rock/New wave album that may surprise you in it’s awesomeness. Just about any compilation album that features The Cramps is alright in my book, but this has the added benefits of Concrete Blonde, Timbuk 3, Lords of the New Church, Oingo Boingo and many more. The highlight track here for me is ‘White Night’ by Torch Song. Killer. Killer. Killer.

You will not find this album on CD, it’s vinyl or cassette tape or nothing, kids. Which only confirms it’s collectibility. Raise your fist Breakfast Club style, and rock out! 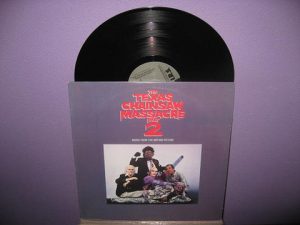 Not only is this record the most dear to my heart, it is also by far the most rare record on this list. Don’t even bother looking for it, you won’t find it. And if you do, it will cost you literally hundreds of dollars. It is the prize of my personal collection, and will literally go to the grave with me.

This soundtrack includes the best of both worlds; Side One is made up of Punk/New Wave songs by various artists like The Pretty Things, UB40, and B.A. Robertson. These are the songs featured in the Club portion of the film. Side Two is all about the music of each story, filled with classical, creepy backgrounds, including plenty of scary violins, a little harpsichord and a lotta lush, sparkling sounds.

Luckily, the complete soundtrack is available as a special feature on the DVD. So if your interest is piqued, you’d better grab one fast, because it’s quickly going out of print.

**** Some of these titles are available and in stock for purchase at, JustCoolRecords HERE, or at the Etsy Shop HERE. *****