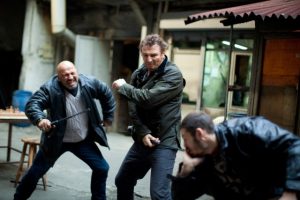 Of course they would make a sequel to ‘Taken’.  The film made over $226 million dollars with a budget $200 million smaller than its gross.  Did they need to make a sequel?  No, they didn’t.  But, since the weird popularity of Liam Neeson as of recently, it was inevitable that the studio make a sequel.  Neeson has sort of taken on the persona that Chuck Norris or Nic Cage has of the past few years.  Meaning that now, Neeson is one true ultimate badass, that fights aliens, robots, kills every bad guy everywhere in the world, and is a jedi.  ‘Taken 2’ takes all of this power, and pretty much forces it into one film. As my friend said, “No, ‘Taken 2’ is not good, but on a Nic Cage scale, it’s a 9.  And I have to agree with that.

‘Taken 2’  is a lot like ‘Love Actually’, and both films have Liam Neeson in it.  Liam Neeson in both films does not have a wife, but has a kid.  In both films, the kid falls in love, and in both films, there is a chase sequence.  I’m just saying, these two films are similar.  I kid, of course.  Neeson reprises his role as retired CIA agent Bryan Mills, who is loving his life and looking after his daughter Kim (Maggie Grace), and his ex wife Lenore (Famke Janssen) since the past events from the first film.

This sequel starts out like a Michael Bay film, with long, fast swooping shots from the sky.  And we see a massive funeral, which come to find out is the funeral of several of the bad guys from the first film.  Murad Krasniqi (Rade Serbedzija), a father of one of the dead guys vows revenge of his son and the others that were killed by Neeson.  (Side note – Serbedzija was in the film ‘Snatch’ as Boris the Blade aka Boris the Bullet Dodger).  Hence, Krasniqi sets up an elaborate plan to kill Neeson and his whole family.  Now instead of Paris, we head to Instanbul where Neeson and his ex wife and daughter go on vacation. 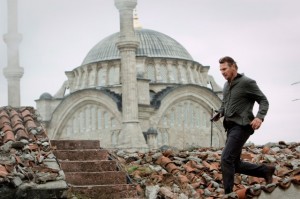 As soon as they check in to the hotel, shit gets real.  No, the daughter is not taken this time, but Liam and his ex-wife are taken, while his daughter barely avoids being captured.  From here on out, it’s pretty much the same film as the first one.  Neeson goes into MacGuyver mode and slips out his 1 inch mobile phone to call Kim to let her know how to help.  With a few shoelaces (not kidding), a magic marker, and a few grenades, Kim (the daughter) finds her dad and mother in Istanbul.  This was so over-the-top, but that’s this movie.

Neeson breaks free from his bonds and tries to rescue his ex-wife, but is too late before they bad guys haul her off again.  A few chase scenes later, and we are at the final showdown, which I swear to you, was straight out of the video game, ‘Mortal Kombat’.  I expected the graphic ‘FIGHT’ to appear on the screen with a countdown timer.  The last showdown involves flying fists only, and since this film is PG-13, I think there were a couple of Jedi force-pushes in there, as it doesn’t look like Neeson made contact with his enemy, but they died anyway.  We’ll just go with the jedi thing.

And I shit you not, this movie ends with milkshakes and laughs.  And yes, there is a setup for a third film, but let me make a suggestion.  If you make a third ‘Taken’ film, make is rated ‘R’. I want to see Neeson have a meltdown like Nic Cage and tear out everyone’s throat like Swayze did in ‘Road House’. 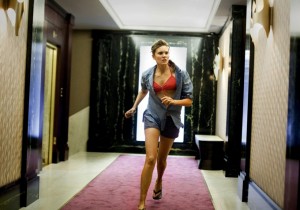 The editing was too fast and quick to see any real action sequences or to see any punches land.  The dialogue was laughable, and the acting was sub par.  I wish Neeson would just let go, and be an insane psychotic looney, when he is hunting bad guys, instead of being his calm, straight-laced self.  It need more.  This movie needed more.  I expected a bigger action film from a guy named Olivier Megaton.  Yes, Megaton is his name.  And yes, Kim (Maggie Grace) does quite a bit of running in this movie, however it seems like she finally learned how to run like a normal human being, instead of a complete idiot.  CLICK HERE for Maggie Grace running.

‘Taken 2’ is terrible on pretty much every level, however, if you are looking for a cheesy, over-the-top, insanely funny action film, where nothing makes sense (like a Nic Cage film), then you will eat this right up.  I suggest a few beers before you see this film, as this will ease your viewing experience.