This is awesome news.  I am currently reading this trilogy right now.  I’m almost done with book two, and I have wanted a film or television adaptation of this book since I heard about it.  I think we got a small glimpse of it with ‘Blade 2’ as the vampire mutants are very similar to the vampire plague in this book, ‘The Strain’.  Carlton Cuse will head up the television show, which Cuse was a big part of ‘LOST’ and ‘The Adventures of Brisco County Jr.’   The series will be over at FX, which has only committed to a pilot, but I expect it to be brought to series fairly soon.  Del Toro will write, direct and executive produce the pilot.

Guillermo’s writing partner will also co-write the script for the pilot. Guillermo did say that these three books have enough material for 3-5 seasons and that he would like to direct as many episodes as he can.  They hope to have the script finished by the end of the year and start shooting the pilot next September.  We have to allow a bit of time to pass for press tours after the release of Guillermo’s epic film ‘Pacific Rim’ in July. 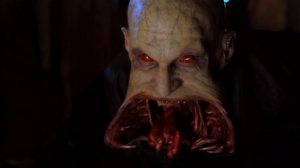 I can’t wait to see who they will cast to play all of these characters.  If the tv show is anythign like the book, it’s going to be very scary and big budget.  ‘The Strain’ starts with a plane that lands at JFK and mysteriously ‘goes dark’, stopping in the middle of the runway for no apparent reason, all lights off, all doors sealed. The pilots cannot be reached. When the hatch above the wing finally clicks open, it soon becomes clear that everyone on board is dead — although there is no sign of any trauma or struggle. Ephraim Goodweather and his team from the Center for Disease Control must work quickly to establish the cause of this strange occurrence before panic spreads. The first thing they discover is that four of the victims are actually still alive. But that’s the only good news. And when all two hundred corpses disappear from various morgues around the city on the same night, things very rapidly get worse. Soon Eph and a small band of helpers will find themselves battling to protect not only their own loved ones, but the whole city, against an ancient threat to humanity.

I cannot wait.  Your thoughts?