Bryan’s Review of ‘Sleepwalk With Me’!!! 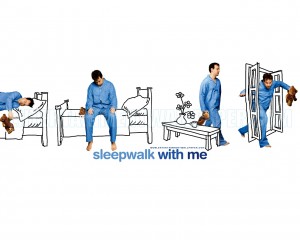 ‘Sleepwalk With Me’ is the sleeper hit of the year.  Back a few years ago,  genius comedian Mike Birbiglia added a long monologue to his stand-up comedy routine called ‘Sleepwalk With Me’. In it, he talks about his real-life sleeping disorder called REM Behavior Disorder where he literally acts out his dreams.  Sometimes, they have serious and painful consequences.  In ‘Sleepwalk With Me’, Birbiglia takes his story a bit further as he plays himself with a different name.  He plays Matt Pandamiglio, a rookie stand-up comedian in New York who has been with his girlfriend Abby (Lauren Ambrose) going on almost a decade now.  As his comedy career starts to take off, Matt struggles with committing to Abby.  ‘Sleepwalk With Me’ is not only warm, inviting, and charming, but it’s one of the funniest films of the year.

I love that Birbiglia talks to us, the audience constantly throughout the film about his story.  Much like John Cusack in ‘High Fidelity’ does, Birbiglia tells us little anecdotes and reminds us that “…we are on his side” when he makes offbeat decisions.  Birbiglia’s character Matt works as a bartender at a comedy club where he hopes that he will get a bit of time every night to do his act, which consists of one line jokes that don’t go over to well, but are awkwardly funny because of his demeanor and on-stage lack of confidence.  His girlfirend Abby has a real job and supports her boyfriend to the fullest. 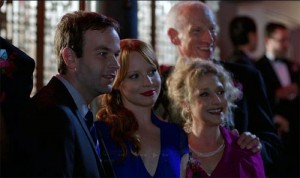 At Matt’s parents (James Rebhorn and Carol Kane) house one evening for dinner, the subject of when Abby and Matt will get married comes up and freaks Matt out.  It’s not because he comes from a broken home, but as Matt tells us onscreen, that his parents have been together for 40 years and thought to himself, “I need to get me some of that.”  Of course he was being sarcastic.  After this dinner, Matt worms his way in the somewhat good graces of a bizarre agent who is a 70 year old woman.  He then begins a cross-country trek by car on a small club tour where the most he would make in a night is $150.  After a few failed attempts at the comedy circuit with his one-line jokes, he loosens up and begins to talk about his life and relationship.  And he kills it.

However, with the stress of his relationship and staying up late on the road, his REM sleep disorder gets much worse.  His dreams consist of being chased by jackals, having sex with women, and being the center of attention at a command center with an incoming missile targeted on him.  It’s during this dream, where he tries to escape the missile by jumping out of a window, when in real life he jumps out of a 2nd story motel window, butting his legs to ribbons.  Finally, he decides that he needs help.

This film is funny beyond belief as it goes through Birbiglia’s start of his comedy career.  The relationship between Matt and Abby is bittersweet, like a fine chocolate.  You know it’s bad, but you keep wanting more of it.  I know I wanted to spend more time with them. Birbiglia’s comedy and stories were featured in NPR’s ‘This American Life’, and there is even a small cameo from Ira Glass in the film. ‘Sleepwalk With Me’ and Mike Birbiglia make the perfect film.  I’m still talking about it two weeks after viewing the film.  I can’t wait to see more from Birbiglia.  See this movie!