‘Beverly Hills Cop’ Returns As a TV Series At CBS!!! 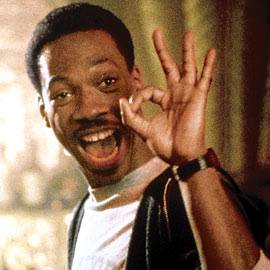 How long have we been hearing about a new ‘Beverly Hills Cop’ project?  Probably for the last 10 years or so.  Eddie Murphy, who plays the lead Detective Axel Foley has expressed interest in doing another sequel, but he has stated that he didn’t think the third installment was very good, and was holding out for a better script.  To me, that doesn’t make sense, because his films over the past several years have been awful, maybe with the exception of ‘Dream Girls’.  Instead of a film, we will get a tv series.

CBS, as we all know has the new Sherlock Holmes drama ‘Elementary’ coming out this fall.  Now, I guess CBS wants yet another detective story and has landed the ‘Beverly Hills Cop’ project with ‘The Shield’ creator Shawn Ryan behind the project.  Eddie Murphy will also executive produce the project.  Does this mark Murphy’s first return to television since SNL?

This new ‘Beverly Hills Cop’ project will have Shawn Ryan act as showrunner with a promise of at least the pilot episode.  If the pilot tests well, then it will go to full series.  And yes, this will be a sequel to the three films that centers around, not on Axel, but of his son Aaron, a police officer who helps take down criminals in Beverly Hills.  Murphy will reprise his role as Axel in the pilot, and I’m sure he will show up from time-to-time if the pilot goes to series.  Ryan will write script and produce.  I hope he directs as well.

Murphy has been wanting to get a new ‘Beverly Hills Cop’ project off the ground for a while, but every attempt as been shut down.  Probably for good reason, since the third one was a complete mess.  Plus, Murphy hasn’t done anything good in a long time.  I loved ‘The Shield’, however ‘The Shield’ was on FX, a network that you can get away with a lot of gritty violence, nudity, and cursing.  This is not the case with CBS.  Are we going to get a PG Axel Foley?  If so, count me the fuck out.  Plus, will Judge Reinhold return?