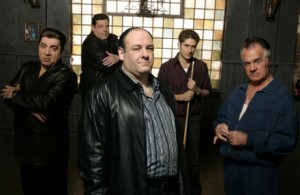 Is it true?  Are the Soprano’s back together?  Nickelodeon has a new tv movie called ‘Nicky Deuce’ in production, which is based on the children’s book co-written by Sopranos’ Steve Schirripa, who is also producing according to Deadline.  ‘Nicky Deuce’ is currently filming in Montreal and stars Sopranos actors Michael Imperioli, Tony Sirico, and Vincent Curatola.

“‘Nicky Deuce’ centers on Nicholas Borelli II (Noah Munck), a nerdy, over-protected teen who gets caught in the adventure of a lifetime when he is sent to Brooklyn, NY to spend the summer with an uncle (Schirripa) and other members of his Italian American family he never knew he had. Confronted with some questionable dealings, Nicky uncovers family secrets and learns that the mean streets of Brooklyn aren’t always what they seem. In a comedic turn, James Gandolfini, who shot his role over the weekend, will play Bobby Eggs, a two-bit guy from the neighborhood who gets unintentionally “scrambled” by the young Nicky (Munck). ”

This sounds hilarious.  The TV movie will air sometime next year and I will try and remember to watch this.  I guess Johnny Cakes won’t make an appearance.