See What Cool Musician/Singer Will Guest Star on ‘The Simpsons’!!! 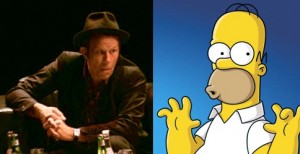 If the Simpsons were a 10 on the cool-meter on a scale of 1-10, then now they are a 15, because Tom Waits has been scheduled to guest star on the hit show for Fox for their 24th season which starts Sunday, September 30th.  Waits will play himself in the show as he helps introduce Homer to a community of survivalists, so says producer Al Jean.

“We did a lot of research into the ‘prepper’ phenomenon, where people are convinced that some horrible catastrophe – like an electromagnetic pulse – is going to occur, and that people will have to survive without the grid,” he says. So naturally, “Homer becomes a prepper.”

The episode is titled ‘Homer Goes to Prep School’ and is scheduled to air sometime in December.  TVline says that Waits won’t sing in the episode, which is a bummer, but you’ll be able to tell it’s Waits by his signature voice which sounds like it was roasting on a fire for 48 hours, then soaked in whiskey for three days, then beaten with a bag of hammers for 24 hours.