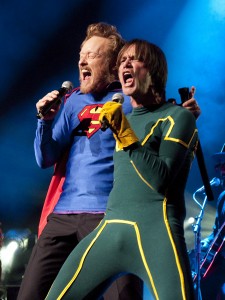 Jim Carrey has just inked a deal that will set him to play The Colonel in the upcoming sequel ‘Kick-Ass: Balls to the Wall’. Great news. I can’t wait.

Universal is trying to sign Jim Carrey to play a big supporting role in the upcoming Kick-Ass sequel titled ‘Kick-Ass 2: Balls to The Wall’.  Jeff Wadlow will be replacing Matthew Vaughn as director, which I don’t think is the best idea.  But I have hope.

Carrey’s role, if he chooses to accept this job, will be called The Colonel, who will help bring together the team of the rag-tag superheroes to fight the evil villains.  The sequel has already signed back on Aaron Johnson as Kick-Ass, Chloe Moretz as Hit Girl, and Christopher Mintz-Plasse as Red Mist.  Even Nic Cage will return for some screen time.

We know that Carrey is a HUGE fan of Kick-Ass and Matthew Vaughn.  He even wore the Kick-Ass outfit with Conan O’Brien on stage.  But this is not set in stone yet.  Lots of deals and negotiations have to be met.  Plus without Vaughn, who knows if Carrey will say yes.  I hope he does.  He would own in this.

Your thoughts?  Start a petition to get Carrey on board?