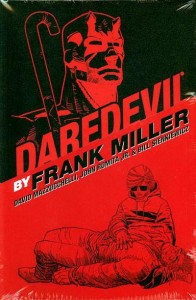 On October 10th, the ‘Daredevil’ right will revert back to Marvel from 20th Century Fox.  So it’s in Fox’s best interest to start production on a ‘Daredevil’ reboot.  Marvel has been discussing this project with Fox chairman Tom Rothman about keeping the ‘Daredevil’ story with Fox past its October 10th deadline, because it looks like Fox is lining up director Joe Carnahan to direct the reboot.

Joe Carnahan directed ‘Smoking Aces’, the remake of ‘The A-Team’, ‘The Grey’, and ‘Narc’.  According to Variety, this new version of ‘Daredevil would be more of  the “Frank Miller-esque, hardcore 70s thriller” take on blind Hell’s Kitchen superhero Matt Murdock — a vision that would deviate from Disney/Marvel’s family-friendly tone.

Carnahan does not have a deal made yet, but we hear he is the top choice.

One of the points of this deal with ‘Daredevil’ staying with Fox would be that Fox would have to give the rights to the ‘Fantastic Four’ universe to Marvel, which includes the big bad villain Galactus.  You remember Galactus.  Marvel also would receive ‘The Silver Surfer’ in that ‘Fantastic Four’ Universe, which Marvel  is eyeing to plant as a film.  As of right now, the ball is in Fox’s court.

It is in everyone’s best interest for this deal to go down.  Marvel will make a far better ‘Fantastic Four’ film than Fox did, and it makes sense with the Galactus character to go to Marvel, since Marvel is prepping him to be a key figure in future super-hero films.  And if Fox sticks with Carnahan and at least a PG-13 rating with ‘Daredevil’, I think they will have a successful  and quality film.  However, it sounds like this version of ‘Daredevil’ will be rated ‘R’.

19 thoughts on “‘Daredevil’ Reboot Gaining Momentum with Joe Carnahan In Talks to Direct!!!”