‘Cabin in the Woods’ Blu-ray Announced and Detailed!!! 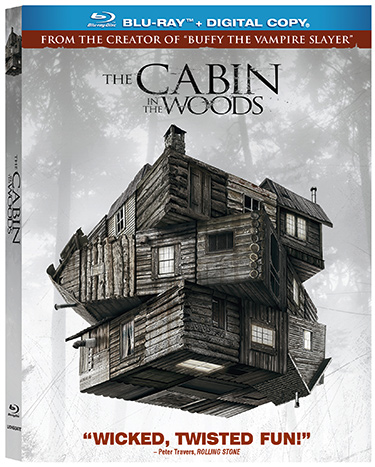 If you think you know the story, think again. Experience the film that critics and audiences are raving about when The Cabin In The Woods arrives on Blu-ray Disc (plus Digital Copy), DVD (plus Digital Copy) and On Demand and Pay-Per-View September 18 from Lionsgate. The Cabin In The Woodswill also be available on EST September 4, two weeks prior to the Blu-ray, DVD and On Demand release.  Co-written by fan favorites, Joss Whedon (The Avengers, TV’s “Buffy The Vampire Slayer”) and Drew Goddard (Cloverfield) and directed by Goddard, The Cabin In The Woods is a film that “horror fans will be gushing about for years” (FearNet).

The Cabin In The Woods begins as a conventional horror movie then transforms into a genre-bending, mind-blowing experience that cleverly mixes screams with pop-culture wit as the scared teens are revealed to be watched by a group of technicians that control their every move behind the scenes.

Starring Kristen Connolly (The Happening), Chris Hemsworth (The Avengers), Anna Hutchison (TV’s Wendy Wu: Homecoming Warrior), Fran Kranz (The Village), Jesse Williams (TV’s “Grey’s Anatomy”), Richard Jenkins (The Visitor) and Bradley Whitford (TV’s “The West Wing”), The Cabin In The Woods is not like any horror movie you have seen before. Both formats come complete with a must-have behind-the-scenes “making of” featurette along with numerous additional featurettes that focus on the make-up, effects, animatronics and more, audio commentary with Writer/Director Drew Goddard and Writer/Producer Joss Whedon and the Wonder-Con Q&A, while the Blu-ray Disc includes the exclusive “It’s Not What You Think: The Cabin in the Woods” Bonus View Mode.  The Wonder-Con Q&A will also be available on Digital Download.  The Cabin In The Woods Blu-ray Disc (plus Digital Copy) and DVD (plus Digital Copy) will be available for the suggested retail price of $39.99 and $29.95, respectively.

A rambunctious group of five college friends steal away for a weekend of debauchery in an isolated country cabin, only to be attacked by horrific supernatural creatures in a night of endless terror and bloodshed.  Sound familiar?  Just wait. As the teens begin to exhibit standard horror movie behavior, a group of technicians in a control room are scrutinizing, and sometimes even controlling, every move the terrified kids make.  With their efforts continually thwarted by the all-powerful eye in the sky, do they have any chance of escape?

* Wonder-Con Q&A with Joss and Drew
* Subject to change