Bryan’s Review of ‘The Possession’!!!

Finally, the Catholics aren’t the only group getting into the demon possession genre.  There is a Judaic version now.  ‘The Possession’ is basically ‘The Exorcist’, but much worse and instead of priests, there are rabbis.  The demon is known as a dybbuk and resides in a wooden box.  ‘The Possession’ is partly based on a true story, but what horror movie isn’t these days.  With the help of Robert Tapert and Sam Raimi producing this little flick, I was hoping this would be truly terrifying.  Instead, I received a dull film with a couple of creepy moments that I forgot about as soon as I got home.  If I learned anything from ‘The Possession’, it’s “Never buy an old mysterious box at a yard sale.”

‘The Possession’ is part divorce, part demonic possession with a twist of Judaism mixed in for a different taste.  We follow the Brenek family which is in a state of turmoil already since father Clyde (Jeffrey Dean Morgan) and his wife Stephanie (Kyra Sedgwick) are newly separated.  This causes the usual emotional problems for their two daughters, the teenage Hannah (Madison Davenport) and 10 year old Emily (Natasha Calis).  Both Hannah and Emily constantly lash out at their dad for no reason, and good guy Clyde always takes it in stride, never yelling at them. 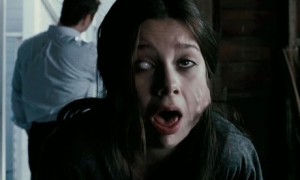 While at a yard sale, Emily convinces her dad to buy her a strange antique box with Hebrew writing on it.  Once home, the strange box is actually a house to a demon and beings to prey on Emily.  Much like ‘The Exorcist’, things start out mild with a few actions of odd behavior.  But when Emily’s room and bathroom become infested with 6-inch moths (one of my worst nightmares), in the words of a Michael Bay script, “Shit just got real.”  We see Emily talking to the box and saying things like she’s eating for two people.  The family was completely unaware of the previous owner of the box and the harm it caused.

After a few more intense behaviors and episodes from Emily, Clyde meets with a professor of this sort of thing and he tells Clyde the story of the dybbuk in a very over-the-top way.  Needless to say, nobody is safe with the dybbuk around, so Clyde heads to the orthodox section of New York to seek out a rabbi who he contacted earlier.  Enter Matisyahu.  Yes, that Matisyahu who plays Tzadok, who is introduced to us by singing to his iPod.  After a brief chuckle, Tzadok introduces us to his father and a group of elderly rabbis who tell Clyde what he must do to save his daughter.  However, none of the rabbis want the task to do it.  Us Jews, tend to avoid manual labor.

Tzadok becomes the hero and decides to to help Clyde and his possessed daughter by performing a half-ass exorcism.  But before, the exorcism, little Emily receives an MRI that reveals the actual dybbuk in her body. Easily the creepiest and best part of the film.  For some reason, the exorcism has to take place at the hospital, which seems to only have a staff of three total people.  The exorcism itself was anti-climactic and over way too fast.  I guess from the PG-13 rating, they were limited on the stuff they could show or do. 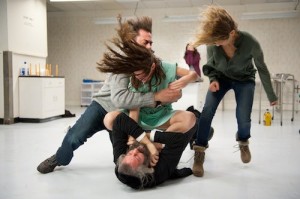 Most of the scares in ‘The Possession’ are of the cheap kind, which include loud musical crescendos, lights going out, and creepy shadowy figures appearing in the night.  There was no split pea soup or any gore in this film, not even when someone is stepping on broken glass.  The acting never got off the ground either.  I like these actors, but it seemed like they sort of phoned it in here and there, especially the real emotional scenes.  And the young Emily played by Calis wasn’t bad, but never really sealed the deal with being frightening.

‘The Possession’ doesn’t quite deliver the scares as it should.  Yes, it has creepy moments, but I doubt you’ll lose any sleep over this one.  But, you can add this film to your ‘Six Degrees of Kevin Bacon’ lineup.