The New Rolling Stones Film ‘Crossfire Hurricane’ Will Debut on HBO in November!!! 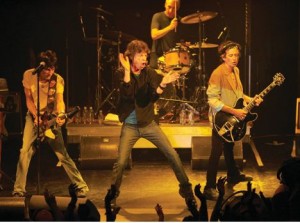 The Rolling Stones, the rock ‘n’ roll icons who have defined creativity, daring and durability, are to be chronicled in a kaleidoscopic new film that will debut Nov. 15 on HBO, it was announced today by Michael Lombardo, HBO’s president of Programming.  The film documents the key periods in their career and their incredible adventures.

CROSSFIRE HURRICANE, directed by Brett Morgen, provides a remarkable new perspective on the Stones’ unparalleled journey from blues-obsessed teenagers in the early ‘60s to rock royalty. It’s all here in panoramic candour, from the Marquee Club to Hyde Park, from Altamont to “Exile,” from club gigs to stadium extravaganzas.

In addition to the U.S. premiere on HBO, in the UK  the film will receive a theatrical release and can be seen by Stones fans in selected cinemas across the country in the fall. It will also broadcast on BBC 2 later in the year.

With never-before-seen footage and fresh insights from the band themselves, the film will delight, shock and amaze longtime devotees, as well as another generation of fans, with its uniquely immersive style and tone. CROSSFIRE HURRICANE places the viewer right on the frontline of the band’s most legendary escapades.

Taking its title from a lyric in “Jumping Jack Flash,” CROSSFIRE HURRICANE gives the audience an intimate insight, for the first time, into exactly what it’s like to be part of the Rolling Stones, as they overcame denunciation, drugs, dissensions and death to become the definitive survivors. It’s the backstage pass to outdo them all.

The odyssey includes film from the Stones’ initial road trips and first controversies as they became the anti-Beatles, the group despised by authority because they connected and communicated with their own generation as no one else ever had. “When we got together,” says Wyman, “something magical happened, and no one could ever copy that.”

From the outset of the film, viewers know they’re in for a white-knuckle ride. No sooner had the early Stones line-up first played live under that name in the summer of 1962 than they were bigger than the venues that tried to hold them. Wyman remembers how the crowds were soon inspiring manic behaviour, especially among screaming girls, whose uncontrollable excitement was obvious as stardom beckoned for the band already earmarked as the bad guys with press headlines like ‘Would you let your daughter marry a Rolling Stone?’

Riots and the chaos of early tours are graphically depicted, as is the birth of the Jagger-Richards songwriting partnership. The many dramas they encountered are also fully addressed, including the Redlands drug bust, the descent of Brian Jones into what Richards calls “bye-bye land,” and the terror and disillusionment of 1969’s Altamont Festival.

The band’s rock ‘n’ roll lifestyle is also discussed with extraordinary forthrightness, including the time of their seminal 1972 album “Exile on Main St.,” which topped the British charts both then and 38 years later in its deluxe reissue. Their very survival repeatedly under threat, we see how theStones survived with a backs-to-the-wall spirit. “We may be going down,” says Keith, “but we’re not going down your way.”

The film illustrates the Stones’ evolution from being, as Mick vividly describes it, “the band everybody hated to the band everybody loves,” through the hedonistic 1970s and Keith’s turning-point bust in Canada to the spectacular touring phenomenon we know today. Richards also reveals the song that he believes defines the “essence” of his writing relationship with Jagger more than any other.

Asked in a formative interview in the film what it is that sets them apart from other groups, Jagger says with quiet understatement, “A chemical reaction seems to have happened.” Keith Richards added, “You can’t really stop the Rolling Stones, you know when that sort of avalanche is facing you, you just get out of the way”. It’s been happening ever since, and the life and times of the Rolling Stones have never been as electrifyingly portrayed as they are in CROSSFIRE HURRICANE.

Eagle Rock Entertainment Chairman and CEO, Terry Shand said, “We are very pleased to continue our association with the Rolling Stones visual rights agenda and their collaboration with such great filmmakers.”

As befits the first rock band to reach the 50-year milestone with their globalstature now greater than ever, the film combines extensive historical footage, much of it widely unseen, with contemporary commentaries by Mick Jagger, Keith Richards, Charlie Watts, Ronnie Wood and former Stones Bill Wyman and Mick Taylor. Period interviews, extensive live performance material and news archive give the production a truly kinetic aura and no-holds-barred approach. CROSSFIRE HURRICANE has taken over a year to make and produce with the full cooperation of The Rolling Stones and will be released in November.