Steven Spielberg To Honor Stanley Kubrick at LACMA with a Kubrick Art Exhibition!!! 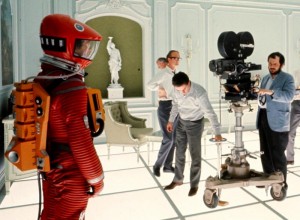 Following the first Art+Film Gala last year at LACMA (Los Angeles County Museum of Art) has planned and announced its second gala and it will not disappoint.  The event is chaired by Leonardo DiCaprio and Eva Chow and will take place October 27th.  This year, Steven Spielberg will honor his friend and collaborator Stanley Kubrick and artist Ed Ruscha. Both Kubrick and Ruscha will have exhibitions there this fall.

The Kubrick show, opening Nov. 1, covers his career from his early photographs for Look magazine to his film work, represented through annotated scripts, production photos, cameras, costumes and props. It also looks at two projects he never completed, Napoleon and The Aryan Papers. The travelling exhibit originated at the Deutsches Filmmuseum in Frankfurt, Germany.

Kubrick and Spielberg worked together on ‘AI: Artificial Intelligence’.  Kubrick died before the film started production, but wanted Spielberg to finish the project.

I definitely want to go to this.  Movie props from Kubrick films?  Yes please.  I want a HAL-9000 unit.  This is such a great idea.  I want something like this in Dallas.