Marvel had a busy day today at Comic-Con.  Kevin Feige (President of Marvel Film Studios) confirmed today that ‘Guardians of the Galaxy’ will be released August 1, 2014.  Also, Edgar Wright (Shaun of the Dead) and Joe Cornish (Attack the Block) have finished writing ‘Ant-Man’ and have filmed some test footage which they showed the crowd at Comic-Con.  Needless to say the crowd went ape-shit. Wright said, Ant-Man is a tiny guy who kicks ass one inch at a time.

Then the panel shifted focus to Captain America.  The sequel will be titled ‘Captain America: The Winter Soldier’ and will release April 4, 2014, a mere four months before ‘Guardians of the Galaxy’.  Then came talk about the Thor sequel, which will be called ‘Thor: The Dark World’.  That will be released November 8, 2013 with Alan Taylor directing. Taylor has directed pretty much ever tv series HBO has ever done.  He’s been in charge of ‘Game of Thrones’ for a while now. 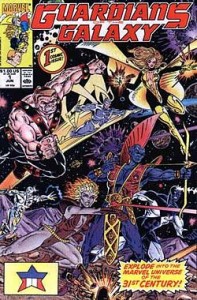 ‘Iron Man 3’ came up in discussion as well with Shane Black (Kiss Kiss Bang Bang) directing.  ‘Iron Man 3’ will release May 3, 2013 with Jon Favreau reprising his role as Happy Hogan.  (Favreau directed the first two Iron Man films.  There was also some early footage of ‘Iron Man 3’ which showed Mandari (Ben Kingsley) and Guy Pearce as another villain blowing up Tony Starks water-front mansion. Robert Downey Jr., Don Cheadle, and Favreau were all on stage.   Also, Stephanie Szostak (Dinner for Schmucks) was added to the ‘Iron Man 3’ cast.

I think ‘Guardians of the Galaxy’ is going to be HUGE!