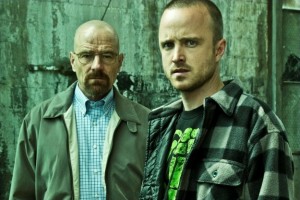 Vince Gilligan (creator of ‘Breaking Bad’), Bryan Cranston, Aaron Paul, Anna Gunn, R.J. Mitte, Jonathan Banks, Dean Norris, and Betsy Brandt were all at the ‘Breaking Bad’ panel today and we got a pretty cool sneak at what’s to come for season 5 of the AMC hit series, which starts tomorrow.

Gilligan told the audience that ‘Breaking Bad’ is heading to Germany and to expect a lot of German accents as to the Spanish accents we have heard for the past four seasons.  This is because of some major financial deals Walter White has made since we last saw him. Gilligan went on to say that Walter does something that removes all his redeeming qualities from his character.  “This season is all about winning and staying on top,” he added. “As we wind down to 16 episodes, we’re cranking it up,” said star Bryan Cranston. 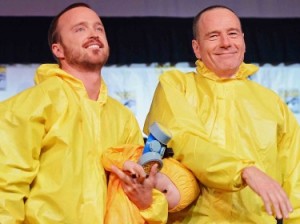 And don’t worry, Jesse Pinkman get’s his catchphrase in there in the opening episode with “magnets, bitch!”  Gilligan also noted that the season opener will “not be violent but intellectual”.  However, the preview that was shown of the new episode had a gun-fight which might not be the most violent thing we have seen, but is a pre-cursor of a ultra violent season.  There will also be some new characters as well as Skinny Pete played by Charles Barker will be returning.

The preview shows White cooking meth full force again with his wife Skylar on board, and that Mike has joined Walter and Jesse in their business.  We also saw at one point, Mike tried to kill Walt for the death of Gus, but it seems that all of that has settled and everyone is working together.

It was cool to see Bryan Cranston and Aaron Paul come out on stage in their yellow meth cooking jump-suits.  I can’t wait.