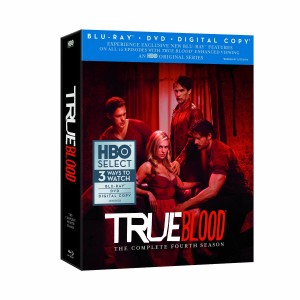 Here we are with HBO’s vampire series ‘True Blood’ season 4.  We can all sink our fangs into this one and come out blissful.  So let’s take a count, shall we?  Vampires, werewolves, fairies, witches, demons, ghosts, were-panthers, and shape shifters have all made an appearance in ‘True Blood’ so far.  That’s eight different creatures, some of who were introduced in season 4.  Can’t wait to see what new and insane creatures and monsters are in store for us in season 5.  This bluray release is stellar, much like its previous seasons with their top of the line audio and video presentations.  If you are a fangbanger or just love blood, then you know you’re going to pick this up.  ‘True Blood’ season 4 is an excellent edition to the collection.

Well, we finally got to see Sookie in her land of the faeries where these faeries seem evil and are monstrous looking.  She is gone away in another dimension for a matter of minutes, but when she returns to reality on Earth, we find out she has been missing for over a year.  There are power struggles within the vampire authority, a powerful witch who can hypnotize vampires, werewolves and were panthers, and demons in this 4th season.  I really loved seeing Lafayette happy in a relationship, even if it was a bizarre one.  Jason was also a delight to watch as his stupidity and willingness to do good was coming to light.  And of course, seeing Eric as the confused and sweet as can be vampire was hilarious.  I love watching this show for the sheer entertainment.  It jumped the shark long ago and is one hell of a fun and silly ride.  It’s got blood, sex, drugs, and rock n roll.  Now what more can you ask for? 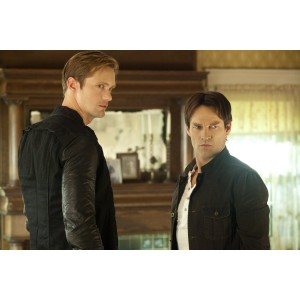 ‘True Blood’ season 4 is amazing with its glorious 1080p HD transfer.  It’s all about the color red in this show and when we see blood or someone wearing a red dress, the color pops vibrantly.  The detail is out of this world where I could see every blood bubble, every scar and scratch, and even the most minor blemishes on the actors.  It was that stunning.  The blacks were deep and inky and the depth made the series seem more than 2 dimensions at times.  I did not notice any aliasing or dirt on the transfer.  This is a great video presentation.  Top notch.

The audio as a lossless DTS-HD 5.1 audio mix that is demo worthy.  Every action sequence, especially when the wolves are running and howling in the distance and that first faerie scene is out of this world.  I felt like I was smack dab in the middle of those scenes.The dialogue is crisp and clear with all of the ambient and sound effect noise dispersed on all the speakers.  The subwoofer gets a work out too with this 4th season.  I did not notice any hissing or cracks on the audio track.  Impressive audio presentation and again…it’s demo worthy. 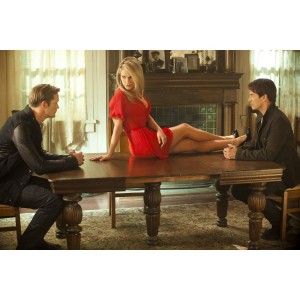 ‘True Blood’ is one fun and amazing series with  season 4 being its most over the top season yet.  I think they amped up the gore, nudity and violence in this episode.  It was quite entertaining.  This bluray release is top notch.  The video and audio presentations were demo worthy while the audio commentary tracks were very good and informative.  As usual, HBO series are more on the expensive side of blurays, but oh, are they worth it.  If this series is around the $45 or less range, I suggest picking it up.  It’s worth it.