Seth Rogen and Evan Goldberg’s ‘End of the World’ film lines up its Big Cameos!!! 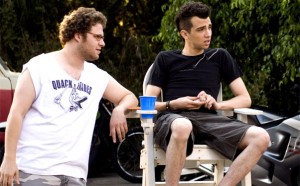 As we have previously reported, Seth Rogen and Evan Goldberg are making their directorial debut with ‘End of the World’.  This is based on a short film that starred Rogen and Jay Baruchel called ‘Jay and Seth vs. The Apocalypse’.  It had both  Rogen and Baruchel who took shelter in their apartment as they dealt with the end of the world.  Of course this is going to be on a much bigger scale and since it’s Rogen and Goldberg’s first job at directing; they want to litter the film with tons of big cameos.

It seems like everyone involved in this project will be playing themselves.  In addition to Rogen and Baruchel, the cast will include James Franco, Jonah Hill, Danny McBride, and Craig Robinson who will all play themselves.  And currently, Emma Watson (Hermione from the Harry Potter films), Jason Segel, and David Krumholtz are all set to appear as themselves in this film.

This feature length version will have most of the actors stuck in Franco’s apartment who are waiting and dealing with the apocalypse.  We also hear that the script has a lot of fun with the actors who may or may not make it out alive.  This sounds like a ball and I look forward to seeing more cameos.  Hopefully Paul Rudd, Joe Lo Truglio, and Jon Hamm make it in the film.