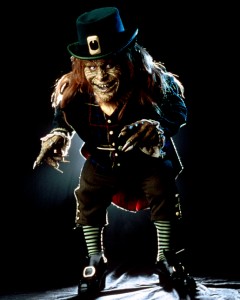 As we have previously reported, there is going to be a ‘Leprechaun’ remake.  This time, Lionsgate is receiving help from WWE (yes, that WWE), to make the film.  We already knew that WWE’s character ‘Hornswoggle’ (Dylan Postl) will be playing the Leprechaun that there will be two films at least for this new reboot of the franchise.

Now, Harris Wilkinson has been hired to write the script.  This will be Wilkinson’s first big project and let’s hope this will turn out to be one.  It’s going to be hard to beat Warwick Davis’s work and persona.  Don’t forget, a young Jennifer Anniston was in the original film as well.  Since WWE is helping with this reboot, I’m curious to see if any other WWE stars will be in it.  Oh please, get the Rock.  I would be sold in a second if he was in it.  I don’t have high hopes for this one, but one thing is for sure…..it’s going to make me laugh.