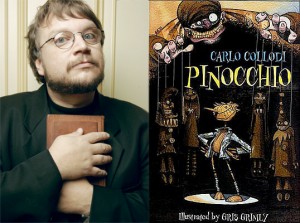 God news, everyone.  Guillermo Del Toro will co-direct ‘Pinocchio’ with Mark Gustafson.  The project will be a 3D stop-motion animated production of the Jim Henson Company.  Gustafson was the animation director on Wes Anderson’s ‘Fantastic Mr. Fox’, so I expect this version of ‘Pinocchio’ to be similar.

The project is planning to start shooting in summer of 2013 and it will be the first animated feature for Del Toro.  The film will be set in Italy during the gap between WWI and WWII.  Del Toro said, “It was when everyone was behaving like a puppet, except for puppets.”  He went on to say, “Little by little, I realized that I should direct – – to the point of collecting puppets along with original art from Disney’s 1940 “Pinocchio.”  The story has had a profound effect  on him according to Variety.

This is why Guillermo Del Toro is the coolest direct around today.  I can’t wait.