Check out the Trailer for ‘The Campiagn’, Starring Will Ferrell and Zack Galifianakis!!! 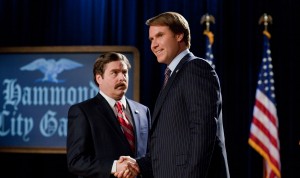 Here is the trailer for ‘The Campaign’ Starring Will Ferrell, Zack Galifianakis, Jason Sudeikis, Katherine LaNasa, Dylan McDermott, John Lithgow, Dan Aykroyd, and Brian Cox.  The film is directed by Jay Roach (Austin Powers).  Official Synopsis: When long-term congressman Cam Brady (Will Ferrell) commits a major public gaffe before an upcoming election, a pair of ultra-wealthy CEOs plot to put up a rival candidate and gain influence over their North Carolina district. Their man: naive Marty Huggins (Zach Galifianakis), director of the local Tourism Center. At first, Marty appears to be the unlikeliest possible choice but, with the help of his new benefactors’ support, a cutthroat campaign manager and his family’s political connections, he soon becomes a contender who gives the charismatic Cam plenty to worry about.  Enjoy.