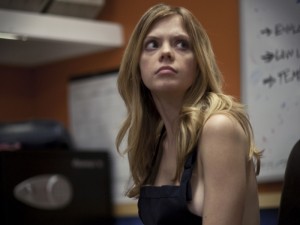 There were rumors surrounding Craig Zobel’s film Compliance–unsettling rumors that piqued my interest. The word on the street was that people were walking out of the film in protest and disgust.  After a long day of watching relatively banal films, I wanted to feel something–even if it was outrage.  After seeing the film, the most disturbing part was that this film is based on a true story. It is truly frightening.

While at work, Sandra (Ann Dowd), the manager of a fast food restaurant, receives a phone call from a man who identifies himself as Officer Daniels of the local police department. Daniels tells Sandra that one of her employees stole money from a customer at the restaurant.  Sandra quickly informs Officer Daniels that she believes her teenage employee, Becky (Dreama Walker), is to blame.

Daniels tells Sandra to detain Becky in the stock room and strip-search her to see if she stole the money.  Despite Becky’s pleas, Sandra obeys. As outrageous as this may sound, the movie ups-the-ante, taking the blind-following-of-authority theme to the worst possible extremes. Merely by making demands over the phone, Daniels (who we find out is not who he says he is) is able to command Sandra and several other employees to sexually abuse Becky. She is made to get naked and repeatedly lift her arms, turn around, and bend over. Ultimately, Daniels orders escalate, ending in Sandra’s boyfriend and the other male employees torturing and raping Becky. 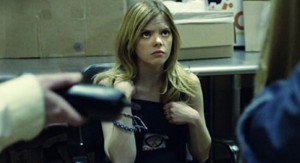 Not once did a character examine the morality of their actions until the end of the film, but merely obeyed the orders of a man identifying himself as a police officer.  This theme of unquestioned authority leading to the degradation of society permeates the film. In the Q&A after the screening, the director discussed the Milgram psychological experiments of the 1960’s and how the results of those studies influenced the theme of the film.

The Milgram experiments showed our natural inclination to follow orders of people in uniform or in higher authority, even if such orders were deranged and required them to do tasks that were contrary to their ethical and moral judgment.  For example, one of the Milgram experiments consisted of: (1) a researcher dressed up in a lab coat pretending to be a scientist; (2) another researcher who is dressed like a patient and hooked up to a fake electric shock machine; and (3) a third person who does not know the purpose of the experiment, but who will be ordered by the scientist to “flip-a-switch” and administer shock treatment merely because the patient answered trivia questions incorrectly. The results showed that despite the grossly inhumane nature of the task, the third person generally complied with the scientist’s commands and shock the patient.

As you watch Compliance, you become so uncomfortable you want to scream. You want the characters to snap-out-of-it and come to their senses! It is hard to accept humans as mere automatons — yet here they were, following each and every grotesque and immoral command of a random stranger.

Compliance is a slow moving film and with Zobel’s unique direction, I felt trapped in the stock room with Becky.  With the slow camera pans and the incredible eerie score, the tension builds–never giving you the chance to escape the torture.  Walker and Dowd give incredible performances as they are forced into an unthinkable situation.  And Officer Daniels, played by Pat Healy, gives one of the most disturbing performances I’ve seen in a while.  During the Q&A, Healy said that it was extremely tough for him to play that role and that he went through some rough times during production. I can only imagine.

Compliance is not for everyone.  I have no doubt that if I showed this film to friends, there would be a coup ending with some people storming out of my home. It is hard to watch in certain moments, even though Zobel uses caution and a certain type of grace during the more disturbing scenes. 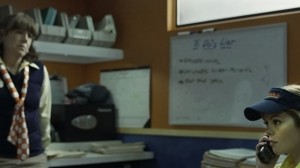 My biggest criticism is that this film failed to live up to its potential. It could have been a powerful social and political commentary about blindly following authority. But that could only be achieved if the members of the audiences could identify with the characters’ situations and at least intellectually understand their choices. Then, the immorality of our empathy would ultimately be revealed – we too would then be to blame for blindly following authority despite its outcome.  If this had been achieved, the film’s impact could have been monumental, leading the audience to its own self-awareness. Unfortunately, you don’t empathize. You just end up being angry with the characters and feeling morally and intellectually superior. The one thing I can promise is that you will be thinking about Compliance for days after viewing.  Whether you think it is good or bad–it will haunt you.