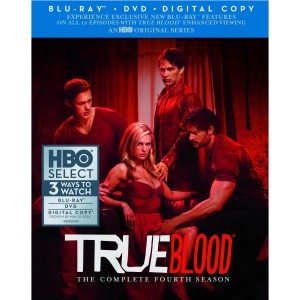 As yet another supernatural force comes to light in Bon Temps, a fresh pot of trouble brews for Sookie and the town’s residents. Releasing May 29, 2012, True Blood: The Complete Fourth Season will be available on “Blu-ray with HBO Select,” DVD and Digital Download. Both sets include the full 12-episode season, along with extensive bonus materials, including exclusive interviews and never-before-seen content.

New from HBO Home Entertainment®, “Blu-ray with HBO Select” offers True Blood Blu-ray buyers the choice of three ways to watch – Blu-ray, DVD and Digital Download. This marks the first time a television series box set has included all three formats in one complete package. Additionally, previous seasons of the hit series will also be available on “Blu-ray with HBO Select” day and date with season four. The digital copy is redeemable via a provider of your choice: iTunes, Vudu, and Amazon, or an UltraViolet copy through supporting providers.

Blu-ray Features (along with all DVD extras):