Nic Cage’s Stolen Comic Book Story To Be Made As A Hollywood Film!!! 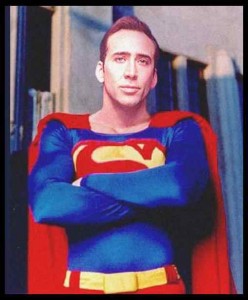 Remember that crazy tale of how Nic Cage’s Action Comics #1 comic was stolen back in 2000 and then turned up last year.  The whole story made national news.  This was the 1938 comic book that introduce Superman.  That issue goes for over a million dollars.  Well Hollywood is going to make a movie about that story and call it ‘Action No. 1’.

The comedy will be written by Robert Ben Garant and Thomas Lennon who were responsible for bringing the world ‘Reno 911’.  The story will follow a group of comic book geeks who attempt to steal Nic’s copy of Action Comics #1.  The part of Cage was written for the real Nic Cage in mind but there is no word yet that he will be playing himself.  Rumors have said that Jason Statham’s name has been associated with the project, but that is just a rumor.

This kind of sounds a little like the movie ‘Fanboys’ where a group of super Star Wars geeks try to break in the Lucas compound and steal a copy of Star Wars Episode 1.  If this movie is anything like that, I know I’ll be interested.    Your thoughts?