Check this Unbelievably Cool Art Mash-Up Of Toy Story and The Shining!!! 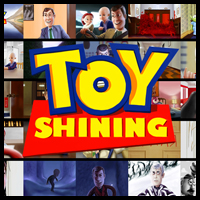 This is just so cool.  Artist Kyle Lambert did a paint mash-up of Toy Story and The Shining on his iPad.  It’s just too cool.  Here’s what he said:  “Earlier this year I began following Lee Unkrich, the director of Toy Story 3) on Twitter (@leeunkrich). As well as his journey to the Oscars with Toy Story 3, Lee often tweets about his passion for Stanley Kubrick and the movie The Shining which inspired him to pursue a career in filmmaking. Having seen both The Shining and Toy Story 3 for the first time recently myself, I thought it would be cool idea to mash the two movies together as a fun side project.”

“It started off with a few notes on a post-it describing how the two movies could be combined and quickly grew into a 25 panel storyboard. Once I had sketched each composition I set about painting the panels with my iPad using the Brushes app. The project took around 2 months to complete in my spare time from idea to the finished storyboard.”

“Coincidently, towards the end of the project I was invited to visit the Pixar Studio for the day by one of their artists Don Shank and thought it would be a great opportunity to deliver a printed version of the project to Lee in person. Unfortunately he wasn’t at the studio that day, but has since received the poster, Tweeting.”