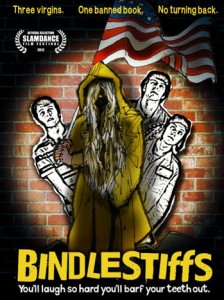 The first film that will be released under ‘Kevin Smith’s SModcast Pictures Presents’ company will be called ‘Bindlestiffs’.  The film will be about three smart-mouthed high school virgins who are suspended from school for graffiti and flee to the inner city to live out the plot of ‘The Catcher in the Rye’.

Andrew Edison will be directing the film with Luke Loftin and Edison who wrote the script together.  The two will star in the film as well along with Mike Akel and Matt Patterson.  ‘Bindlestiffs’ will be released much like Smith’s ‘Red State’ was, with a theatrical tour around the country and Q & A’s with Kevin Smith and the cast and crew.  The movie will be released sometime in June.  Kevin will be at SXSW this year looking to buy new films.

When I went to Smith’s ‘Red State’ tour in KC, I can most certainly say it was one of the top three movie experiences of my life so far.  Your thoughts?