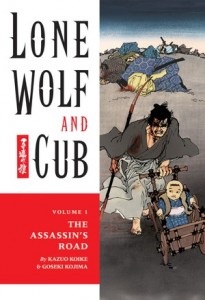 The 1970’s Japanese manga comic book ‘Lone Wolf and Cub’ was picked up by Kamala Films earlier today with ‘Fast Five’ helmer Justin Lin set to driect.  David and Janet Peoples will write the script for the adaptation.  David and Janet wrote ’12 Monkeys’ and ‘Blade Runner’ to just name a couple of films.

“The original was set feudal Edo period, and chronicles the story of Ogami Itto, the Shogun’s elite executioner. In an attempt to take his position, the rival Yagyu clan falsely accuses Itto of a crime and murders his wife. Disgraced, Itto is forced to wander Japan with his three-year-old son Daigoro as an assassin for hire, earning the title “Lone Wolf and Cub.” Ultimately, Itto and Daigoro seek revenge on the Yagyu clan.”

While I’m not a huge Justin Lin fan, I do like the Peoples.  I can see this film going either way really.  Sadly, I think it’s going to fall by the way side.  I hope not, but Lin’s track record is not good.