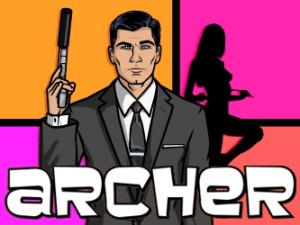 ‘Archer’ can fans rejoice.  FX has decided to renew ‘Archer’  for a 4th season with a 13 episode order.  In addition to that FX has signed a production deal with ‘Archer’ producers Adam Reed and Matt Thompson and their animation studio.  So we can expect new projects from them in the future.

Each season of ‘Archer’ has been getting significantly more viewers and ratings.  Some as high as a 62% gain.  As of now with season 3 of ‘Archer’ the series are getting a little less than 3.5 million viewers an episode. “It was an easy decision to order more Archer,” said FX’s EVP original programming Nick Grad.  “Adam, Matt, and our amazing voice cast are delivering one of the funniest and smartest shows on television.”

The deal with the producers and FX is for two years with an optional two extra years for them to do more ‘Archer’ and any other projects they get up and running.  So, huge day for everyone and every fan of ‘Archer’.