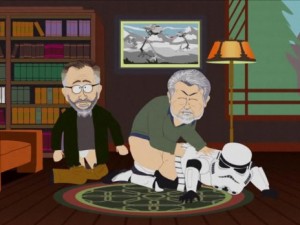 Seriously people.  What the fuck?  The worst movie of all time is re-released in theaters in 3D and rakes in $73.4 million dollars in two weeks.  Did you think the movie somehow over time became better?  This is beyond belief.  So far ‘Episode 1’ has made over 1,009.4 billion dollars which will soon pass ‘The Dark Knight’ for the number 10 top grossing movie of all time. $1.5 million away to be exact.  So you know it’s going to happen.

Why do you give Lucas the power?  ‘Star Wars’ isn’t even good anymore.  Some of you might say “the originals are good”.  I will tell you that they are not anymore.  The whole Star Wars saga has become one big joke.  And that is all thanks to Lucas. The original ‘Star Wars’ films are so far from what they were, that they are practically unrecognizable.  Therefor, they are not the same film.  It boggles my mind that so many people would rush out to see the worst film of all time.  The film in fact that they said they hated time and time again.

Come on people.  Stop seeing ‘Star Wars’ and write and demand Lucas put the original three films unaltered and untampered with on bluray.