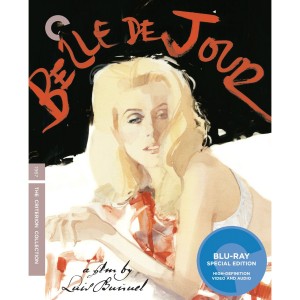 Luis Bunuel’s ‘Belle de Jour’ is a fantastic sensual odyssey that I enjoyed immensely.  Catherine Deneuve is just radiant and amazing in the lead role.  Criterion really rolled out the red carpet with this release.  The video and audio presentations are fantastic and the extras are very good.  If you are a fan of the beautiful Catherine Deneuve and or an intense tale of sexual fantasy and fetish, then this movie is for you.  I just love this movie and it will make a great addition to your criterion section.

‘Belle de Jour’ which is based on a book of the same name follows Severine (Catherine Deneuve) who is a normal house wife who is in a boring routine of life with her husband whom she is not infatuated with and definitely not interested him physically.  Side note – – I just love the name Severine.  It reminds me of the song by Velvet Underground called ‘Venus In Furs’ which is all about fetish and BDSM.  Back to the review, Severine hears about a local brothel and she becomes fascinated by that life and wonders what it would be like to be a lady of the evening.  Reluctant at first to check out the place, she gains the courage to enter the brother and realizes she loves it and ultimately joins the brothel as a working girl.  Severine’s sexual adventures get more and more intense involving more and more different and strong fetishes.  One of her clients becomes so entranced by her that he becomes jealous of any other man i her life including her real life and husband.  This causes some serious and violent instances.  This was a film ahead of its time and no doubt definitely caused some controversy back in those times in the experimental 60’s.  The film tackles the somewhat strong subjects of; sexual fetishes, empowerment, BDSM, lust, and love.  It is done with such grace, wit, and perfection.  Bunuel’s direction of Catherine is impeccable.  Her transformation from house wife to a bordello woman of the night is amazing. I love when she gives that innocent smile as she is in her bordello role.  You can see the innocence of her house wife attitude in her eyes ever so slightly.  ‘Belle de Jour’  is a surreal and fantastical fantasy of a film that I will and many others will enjoy time and time again. 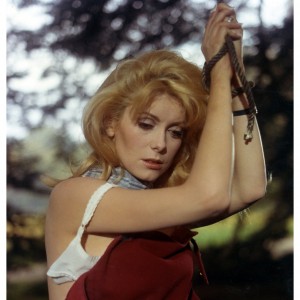 ‘Belle De Jour’ has a 1080p/AVC MPEG-4 transfer in a 1.66:1 aspect ratio.  For a a film that is almost 50 years old, this movie looks fantastic on bluray.  Granted there is a hint of fading and a few specks here and there, but it flows nicely with the soft thin layer of grain that give this sexual classic its great tone.  Whatever problem there is with the film, is very minimal and is only because of the film’s age.  The detail of the film if amazing and the colors are very natural and bright.  The contrast is up which give the whites a natural glow.  The film pops with that filmic quality that I so miss with the intro to the digital world.  This is a real gift and beautiful video transfer.  The audio has a French LPCM mono track mix with optional english titles.  This is more of a dialogue drive movie, so no big booming sounds.  The dialogue is crisp, clean, and clear and the ambient noises, which there are plenty of, are evenly distributed and sound natural.  The score, dialogue, and FX are woven evenly throughout the movie and not one sounds too loud or soft.  This audio mix has been cleaned up nicely and did not have any hisses or cracks.  Lovely audio presentation.

THE ULTIMATE WORD
‘Belle De Jour’ is a wonderful journey into the fantasy and sexual adventures of the 1960’s in France.  Director Bunuel does an astonishing job of showing us women empowerment, and fetish through a graceful and witty lens.  The video and audio presnetations are amazing for a 50 year old film with very little to no flaws.  The extras, while I wish there were more, are decent and informative.  I love this film and love showing it to people.  Definitely pick this one if you can.  You won’t regret it.
-Bryan Kluger