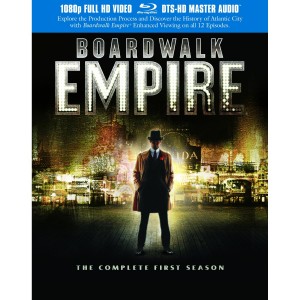 HBO’s ‘Boardwalk Empire’ is easily one of the most brilliant and engaging series to air in the past decade.  It is full of colorful characters, gripping story lines, and tons of violence and sex.  And all of the series is based on actual people and events from the roaring 20’s in Atlantic City.  You can tell that everyone involved with the series has a passion and love for the show.  This bluray release is incredible.  The video and audio are top notch while the extras are a lot of fun for any fan of the show.  This gets my highest recommendation.  So let’s have a glass of scotch and be secret about it.

HBO’s ‘Boardwalk Empire’ follows a variety of characters, but mainly a man that goes by Nucky Thompson.  Nucky is the Atlantic City treasurer, but secretly and under the table runs all of Atlantic City.  He constantly struggles with being a good man and evil man, but ultimately he is all about making money.  Nucky is played to perfection by Steve Buscemi.  Nucky is basically corrupt when he takes over the liquor trade right after prohibition comes into effect.  This of course comes with a violent territory and opposition.  Nucky has a right hand man by the name of Jimmy Darmondy (Michael Pitt) who is my favorite character of the show.  Jimmy is a young man who has just come back from the war where Nucky has been a big father figure in Jimmy’s life.  What’s so cool about Jimmy’s character is that his work for Nucky leads him to 1920’s Chicago to where he meets a young Al Capone, before Capone became the legend he is today.  It’s amazing to see Capone crawl up the ladder and see how he does it.  Aside from the criminal underworld of Atlantic City, we get to see two other characters who are not in the gangster game.  One is a lady by the name of Margaret Schroeder (Kelly Macdonald) who becomes Nucky’s girlfriend and eventual wife by a series of unfortunate events at the hands of Nucky.  The other character is Lt. Van Alden played to perfection by Michael Shannon.  Van Alen is a detective who is assigned to bring down anyone consuming alcohol.  So immediately he is on Nucky’s radar.  Van Alden’s character is probably the most complex.  He is a sadistic man and in my opinon more evil than Nucky.  It’s really amazing how they created 1920’s Atlantic City.  With the building of complex sets and some use of CG, the world of the roaring 20’s comes to life right before your eyes.  And let it also be known that Martin Scorsese is an executive producer of the series and even directed the first episode which is one of the best pilots I have seen in a long time. 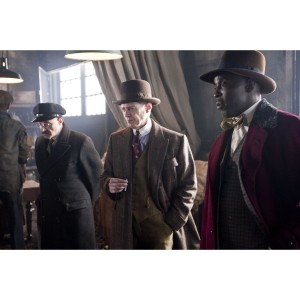 HBO’s ‘Boardwalk Empire’ has a glorious 1080p transfer in 1.78:1 aspect ratio.  The series looks amazing.  The depth is phenomenal and the flesh tones are natural and smooth.  The colors are vibrant in that cold dark style.  The detail is out of this world.  All the blood looks very real and all the dark woods and 20’s woven clothing look amazing.  You can make out every stitch.  And all the CG work for the buildings and boardwalk look ultra real.  This is demo worthy.  The audio comes in an impressive DTS-HD 5.1 mix and sounds spectacular.  THe dialogue is crisp and clear and evenly distributed.  The large crowds in the series have a good sound on the surround speakers and all the ambient noise sounds fantastic and clear.  All of the FX sound realistic from the old cars to the old guns firing.  What an incredible audio experience. 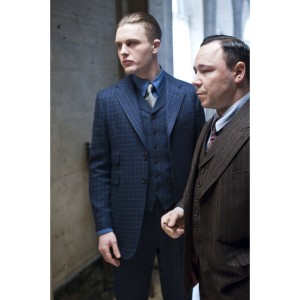 THE ULTIMATE WORD
HBO’s ‘Boardwalk Empire’ is a one of a kind show.  It has it all.  Violence, romance, betrayal, music, drama, and a hint of comedy.  This bluray release is a must own.  The audio and video are demo quality and the extras are a lot of fun and very informative.  I can’t wait for the second season to come out on bluray as well as the third season to air on HBO.  A must buy.
-Bryan Kluger