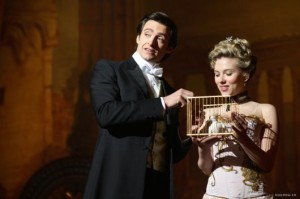 That’s right.  Hugh Jackman will head back to the big stage on Broadway for a new show, but not as Wolverine.  But rather ‘Houdini’.  Houdini marks the debut of Aaron Sorkin on stage, with music by Stephen Schwartz. Jack O’Brien has been set to direct the production, which will be presented by producer Scott Sanders and David Rockwell, the latter of whom will design the sets.

This musical has been in the works for a long time.  At one point, Danny Elfman was doing the music for the production, but now the producers have decided on something more original and contemporary for the world’s greatest magician.  Also, Jackman’s about to start the movie musical Les Miserables, directed by The King’s Speech helmer Tom Hooper for for holiday 2012 release by Universal Pictures.  Jackman said,  “I have been deeply fascinated by the life of Harry Houdini since I was young, and in many ways I’ve been preparing for this role my whole life. I am thrilled to be collaborating with this collection of artists who are all at the top of their game.”

And we all know who Aaron Sorkin is.  He recently won the Oscar for writing ‘The Social Network.  I’ve been waiting for a Houdini stage play.  I am and have always been fascinated with magic.  And Jackman was in that magician film a few years ago ‘The Prestige’.  I hope part of this was inspired by one of my favorite books ‘Carter Beats the Devil’.