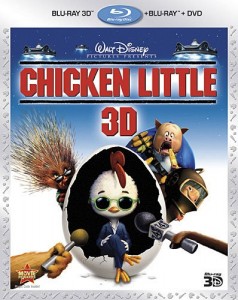 Chickens?  Pigs?  Aliens?  Zach Braff?  A major studio animated epic film?  Oh my!  In the wake of all that is awesome of Pixar, Disney put out their first full blown CGI film to compete with Pixar.  While it does not hold up to really any Pixar film, this little film has enough spark for you to enjoy a few times throughout the years.  Nobody really remembers the film, but they all sort of enjoyed here and there, but ‘Chicken Little was one of those films that gets forgotten.  If you are a fan of the film and don’t already have it on bluray, then you’ll want to pick this release up.

“The sky is falling!”  “The sky is falling!”  That’s right, Chicken Little (Zach Braff) has “cried wolf a few times before in his little barnyard town when he thought the sky was falling when an acorn hit him.  Now over the years he has working on getting his reputation and friends and family to think better of him.  Well, when the sky actually does fall with an alien invasion, Chicken Little tries to help save the world from an impending doom and warn everyone.  But will they believe him?  Will he make his friends and family proud once again?  With the help of a few animal friends, he sets out on adventure to save the world.  There are enough good themes between characters like the father/son dynamic and the trust issues that ensue.  And the action is pretty decent here and there, but the film seems to take multiple directions and gets meshed together throughout the movie.  Plus I think the score and music could have been better.  But most young kids will find this film entertaining.  But now we all know why Pixar is AWESOME.

The video is presented 1.78:1 with glorious 1080p resolution.  This is yet another re-release from Disney in 3D and while it is not the worst I have seen, it certainly is not the best.  There was tons of ghosting and aliasing throughout the film.  Things were blurry and just hard to watch.  This gets worse during the nighttime scenes which there are plenty of.  Besides that, when the 3D pops out at you during the day scenes, the video works and is great.  There aren’t many moments of this, but when they happen, you will enjoy them.  The textures, and colors are fantastic.  The added depth in the scenes were a very nice touch and look really good.  I was a bit disappointed in the video with this release, but it still has a few bells and whistles to keep you entertained.  The audio has a lossless DTS-HD 5.1 mix and sounds incredible.  The dialogue is crisp and clear and focused on the front speakers while there is a nice and even ambient sound through the whole speaker system.  When the action comes full force, your speakers will make you feel like you are in the film.  Some of the music in the film was too loud and drained out the dialogue and ambient noises, but other than that, it was a really nice audio presentation.  Much better than the video.

THE ULTIMATE WORD
‘Chicken Little’ is a fun movie at times with a great voice cast.  No doubt most kids will love it, but the older ones won’t. The video quality has a lot of problems and is one of the not so great 3D releases of the year.  The sound however is pretty outstanding.  The extras are a lot of fun, especially the commentary.  If you already own this film on bluray, save your money and wait for another release.  This is a rental at best.
-Bryan Kluger