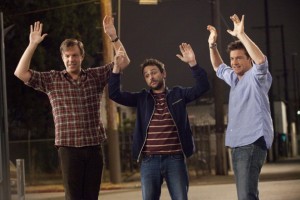 The studios and John Francis Daley (Freaks and Geeks/Bones) and Jonathan Goldstein have come to a deal to write the screenplay for a sequel to the much successful ‘Horrible Bosses’.  It is expected that Jason Bateman, Charlie Day and Jason Sudeikis would return to star in the movie, and the studio is in early talks with helmer Seth Gordon to return to the director’s chair.

‘Horrible Bosses’ was released in July 8, 2011, and followed Bateman, Day and Sudeikis as average joe employees who try to off each others’ bosses. Jennifer Aniston, Colin Farrell and Kevin Spacey starred as the bosses while Jamie Foxx had a minor role as a “murder teacher’.

The movie was made for about $35 million and then made $209 million worldwide.  So you can see why they would want to make a sequel.